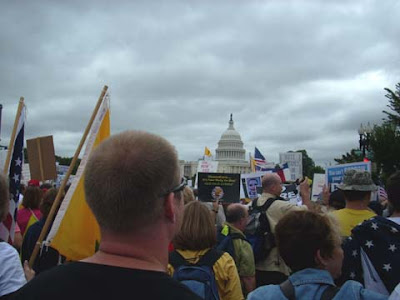 Three SWAC bloggers went to Washington for the 9/12 Taxpayer Protest March ... we all rode the bus together up and back and walked in the march down Pennsylvania Avenue to the rally. It is always interesting to see the various perspectives from different eyes of an event. Here are the posts (so far) from SWAC bloggers Bob Kirchman and David Karaffa (keep checking back ... we are still posting photos and commentary):

- David Karaffa at the Augusta Conservative has March on Washington!!, photos of the myriad of rally signs. My favorite was the one that said, "Republicans ... This is a spine!" with a drawing of said spine.

- Yankee Phil couldn't be there but he has picked up the photos, the discrepancies on the number of marchers, and the mainstream media's inaccuracy in reporting the event.

- Fishersville Mike also wondered about the attendance numbers, and I laughed out loud about speed bumps with spikes and Mike's quest for a photo of the Boob Czar.

You forgot me? I've been focused on posting about the "Boob Czar." Did you see her?

My wife and I were there. I know the low-ball estimates are wrong, but some of the estimates are so high they are hard to fathom. I would guess 500,000 at minimum. It was an incredible day. I will be posting some pics on my blog tomrrow.

Oops, Mike ... sorry ... but I've got your posted now. I've given myself twenty lashes with a wet noodle for that omission. :)

I'm so sorry to have to report that I did not see the Boob Czar while in DC. You would think in 600 photographs, at least one would include the lady you're looking for! But I'll keep an eye out....

Edgycater, congratulations on being part of one of the most inspirational events I have ever witnessed! It was amazing, wasn't it? All those people, all those signs, all those FLAGS ... and the wind was perfect on Saturday for flags! American, Don't Tread On Me, and state flags were beautiful and made quite a statement waving in the air.

Glad you were there to experience it!

I was there as well. The rally was great, and I hope Congress heard our pleas to stop universal health care.

Krystle, I kept an eye out for you Saturday ... sorry we missed you.

Thank goodness for the bloggers to help get the real story out since so many in the mainstream media have missed it or are trying to spin it into something smaller than it was.

It was an amazing experience. I'll never forget that day....