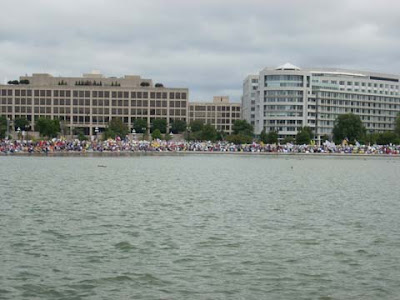 9/12 March on Washington continued around the U.S. Capitol reflecting pool and to the Capitol.

Conservative bloggers have been busy since Saturday posting photos and spreading the word about the thousands of conservative 9/12 ralliers who turned out in Washington, DC, because we cannot depend on the mainstream media to do it.

In California, American Power's Donald Douglas attended a 9/12 rally of 3,500 folks and he's been rounding up other bloggers' works today. I had emailed him this morning about the great success in Washington and so he begins his post with this:

Something Going On in America! 9/12 March on Washington Roundup

I think I speak for a lot of conservatives when I confess I'm overwhelmed with information and blog links for the 9/12 March on Washington. So, I'm going to do a little roundup of friends, some of whom graciously linked to my 9/12 report yesterday.

First, here's the e-mail I received from my friend Lynn Mitchell in Virginia:

We did it!! The 9/12 March on Washington yesterday was absolutely breath-taking, an emotional experience for many who thought they would never see that many conservatives in one place at one time. It was a sea of faces, flags, signs ... young, old, short, tall, all shapes and sizes, some on walkers or canes ... it was the face of America.

Yesterday we made history. Will conservatives continue on this quest to take back our country ... or will they quietly slip back into their complacency of the past 30 years?

I am busy posting photos today -- I took 600 photos yesterday -- of the faces, the signs, the flags and banners. I'm 56 years old ... I never thought I would see this day.

Keep up the good work and the good fight on the Left Coast. We will do the same here. And thank you for being a conservative educator who is not indoctrinating our children into the culture of the Left.

Donald then provides over two dozen links to 9/12 March on Washington posts nationwide. He is correct about being overwhelmed. Everyone is trying to upload photos and write commentary but something tells me we will all be writing about this for a long, long time. I will need a few more days to post more photos and write more remembrances of the day.

Meanwhile, thanks to American Power and everyone else who has worked so hard to get the word out about what really happened in Washington, DC, 09.12.09 ... the day the Silent Majority was silent no more.

Lynn, thanks for all the beautiful pictures and links! Good job.