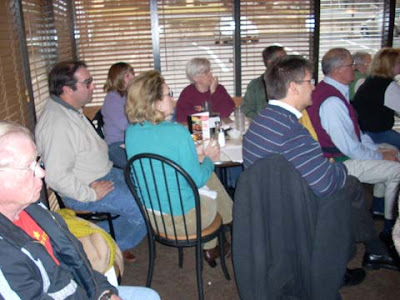 Shenandoah Valley folks listen to Churchville attorney Francis Chester address the Augusta County assessment issue and his recent sanction after being countersued by the Board of Supervisors. There was an enthusiastic outpouring of support for the folk hero now known as Robin Hood. 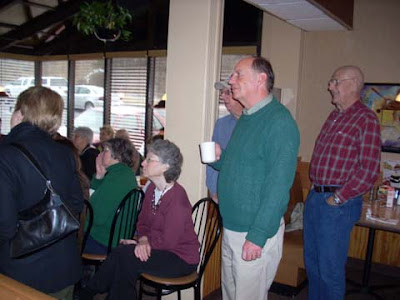 Friends and neighbors ... there was standing room only. 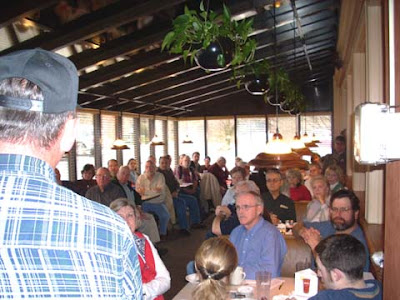 Mike Shull talked BOS issues and the need to rein in spending. 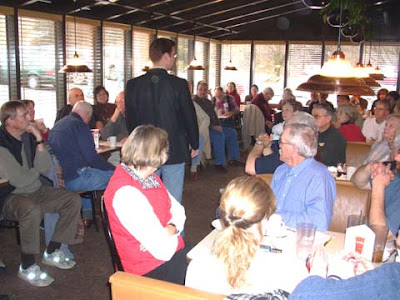 David Karaffa was energetic and encouraged others to consider running for public office. 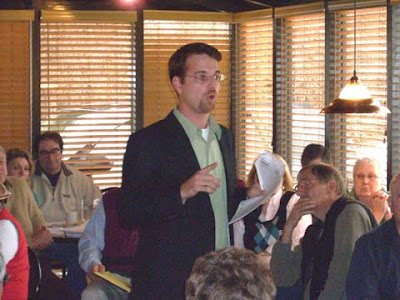 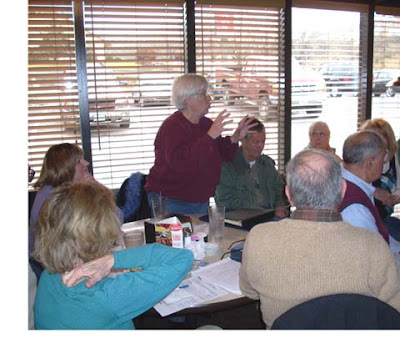 Suzanne Curran energized the crowd with her powerful words to get involved, stand up, and be heard. 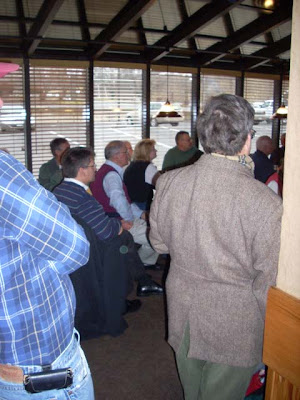 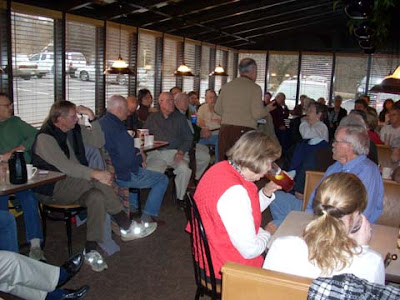 Francis Chester walked through the crowd as he spoke. 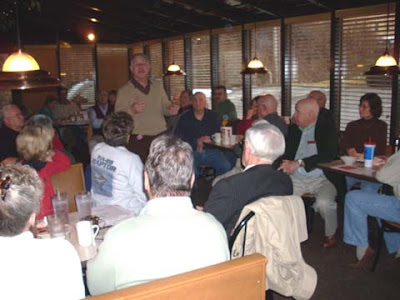 Mr. Chester has spent hours working pro bono on behalf of over 10,000 citizens of Augusta County in the real estate assessment case. 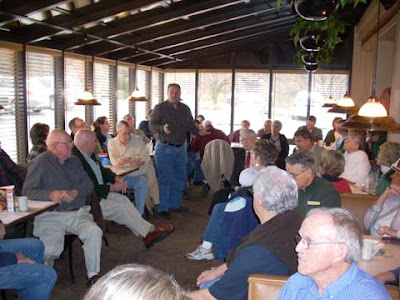 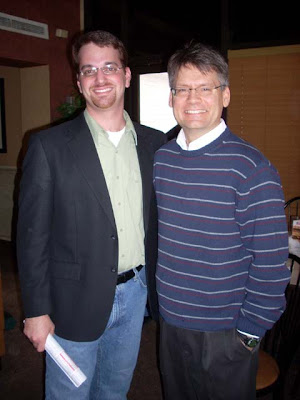 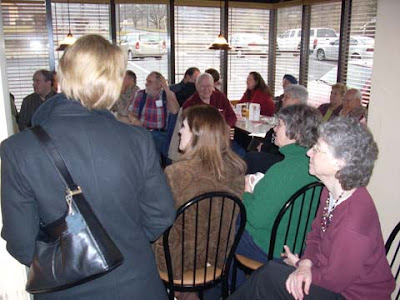 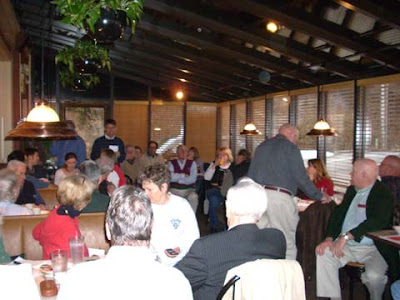 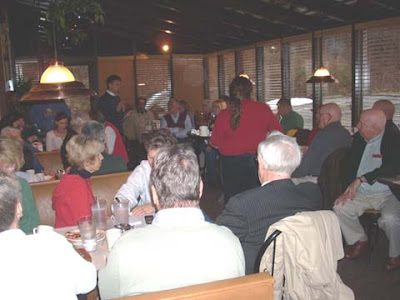 The crowd listened intently as our wonderful waitress made the rounds.


On Saturday morning, January 23, 2010, over 70 conservative activists from Staunton, Waynesboro, Augusta, Rockingham, Harrisonburg, Shenandoah, and beyond who consider themselves Independents, Tea Party Patriots, conservative Republicans, Constitution Party, and more met at the Staunton Shoney's for fellowship, to contribute to the conversation, and learn how to become more active in local conservative politics.

Breakfast was led by local conservative leader Dr. Kurt Michael who emphasized that the SWAC Conservative Round Table is not a political party or organization but rather a gathering of like-minded conservatives who care more about their country and community than they do about political labels.

The three goals of SWAC Breakfast are:

1) Social ... a place for networking with like-minded individuals and groups.

2) Educational ... a place to educate each other on current conservative thought and to keep each other informed of current events and issues.

A variety of conservative leaders addressed the crowd.

Churchville attorney Francis Chester was introduced by Kurt Michael as Augusta County's "Robin Hood," a name given to Mr. Chester by Judge Victor Ludwig, to cheers and applause from the crowd. Mr. Chester recapped the year-long real estate assessment case in which he has represented 10,600 county citizens pro bono. After Augusta County countersued Mr. Chester for what they called a frivolous lawsuit, Judge Ludwig sanctioned him with a $2,000 fine and compared him to Robin Hood in his opinion letter. Mr. Chester received rousing response -- applause and cheers -- after the update to his battle that he has fought on behalf of over 10,000 citizens.

Michael Roman and Ed Long have joined forces to form a Defense Fund for Mr. Chester to appeal the sanction. Sign-up sheets for volunteers and contributions were collected. To help contact Michael Roman.

Lyn Bing and Sue Ward were recognized for their help lining up bus trips on behalf of the Shenandoah Valley Tea Party.

Pam Richmond, wife of Tea Party Director Bruce Richmond, announced that the next Tea Party meeting will be held on Thursday, February 4, at 7:00 p.m., in the upstairs meeting room of the Staunton Public Library. We send get-well wishes to Bruce who recently took a fall on the ice.

Dave Mason, chairman of the Augusta County Constitution Party, thanked everyone for their efforts in recent elections and particularly in the Massachusetts special election earlier this week when Republican Scott Brown won the seat formerly held by Ted Kennedy.

Lynn Mitchell, 6th District Representative on the RPV Central Committee, thanked everyone for coming out and for their help in the Scott Brown race in Massachusetts. She told the crowd that in Nevada many conservatives were working to defeat Harry Reid ... Tea Party Patriots, ResistNet, local 9/12 groups, Free Republic, Ron Paul supporters, Libertarians, and conservative Republicans ... a group much like the SWAC Conservative Round Table Breakfast.

Michael Palmer announced that Florida U.S. Senate candidate Marco Rubio will have an internet money bomb sometime on February 10 to raise money for his campaign, sponsored by the Senate Conservatives Fund (SCF). A recent money bomb for Scott Brown raised $1.3 million in 24 hours.
Dean Welty with the Valley Family Forum unveiled the prototype of the proposed "In God We Trust" Virginia license plate. All the information is here. Dean also gave a heads-up to the Forum dinner on May 24 when special guest speaker will be David Barton of www.wallbuilders.com. If interested in attending, please contact Lynn Mitchell. More information will be coming.

Suzanne Curran, conservative activist from Shenandoah County, encouraged all to speak out publicly and stand behind candidates and people like Francis Chester who are out there fighting for We the People, and said we cannot let these good folks stand alone. She also emphasized that we need to become vocal and loud and public with the judiciary system.

Michael Shull, who is considering running for the Augusta County Board of Supervisors in the Riverheads District, brought out cheers and applause from the crowd when he began by saying, "I'm just an ole country boy and I ride around the county in my old pickup truck." He said changes are needed in the real estate assessments ... that we're losing 11 deputies due to budget cuts but we have to stop overspending in the county ... every BOS meeting has more and more spending and there is a need for fiscal conservatives.

David Karaffa, another who is considering running for the Augusta County Board of Supervisors in the Beverley Manor District, began by introducing himself as an RN at Augusta Health Care which brought cheers from the crowd. David emphasized the need for term limits and said the President of the United States only gets two terms ... that's all other office holders should be allowed. He also made a plea that everyone consider running for public office or look around to find others who would run for office.

Lyn Bing encouraged everyone to be vigilant about health care even though Scott Brown won in Massachusetts ... be aware the Democrats will continue to try and get the bill through.

Bob Kirchman and Jason Bibeau made comments about local spending and the need to curb that.
One attendee made the following comment: "I want to be an American. I've quit the Republican Party. Conservatives are pulling people in ... these Republicans (Augusta County) are just pushing people out."

SWAC bloggers Augusta Water Cooler, Augusta Conservative, and The Journey were there along with SWAC Girl.

We want to thank Shoney's for their hospitality and thank our waitress who was exceptional. Our appreciation goes out to all who joined us to make it another successful breakfast with uplifting discussion.