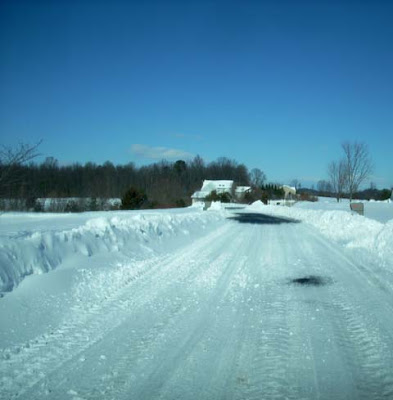 Winter update from the Shenandoah Valley of Virginia....

Tom White and I were emailing back and forth yesterday about his trip next week to CPAC (be sure to catch his blogging updates from there on Virginia Right!). He told me he had followed the snow storms in the Shenandoah Valley through the photos on my blog. I laughed when I read that and responded:

But I love it. I'm a winter person and we so rarely have these types of snows so I know it's not anything that will be a continuous problem. I will probably never see another winter like this in my lifetime. Growing up in Chesterfield County, we used to have lots of snow when I was a kid but not the multiple two-footers that we've gotten this year.

We had a whisper of snow yesterday morning when I woke up, and "snow" is in the forecast again for Monday. There's still a foot or more on the ground and piles are everywhere including those "tunnels" I described above.

Road crews have done a good job clearing the streets I've been on but parking lots at stores and restaurants are still an icy nightmare requiring caution to avoid broken bones and bruises. Someone described driving through large parking lots peppered with 15-foot-high snow piles as being similar to driving through icebergs. Interesting analysis....

The best thing about all of this is the water table in the Shenandoah Valley. We had a number of drought years ... about 5-6 years ago was the worst when wells all over Augusta County went dry. We were fortunate that ours did not. Ponds dried up and many have been slow to recover since that time. Having this much snow will slowly release that moisture into the ground and help tremendously.

Augusta County school children should go back to school Monday for the first time in two weeks. I say "should" barring any winter weather between now and tomorrow morning.

We are mid-way through February which traditionally can be the snowiest month for this area. It can also be unexpectedly mild with 70-degree days and, though some may be tired of snow, few would want the weather to warm up that much because it would cause widespread flooding.