Eric Cantor breakfast: A who's who in Virginia Republican politics 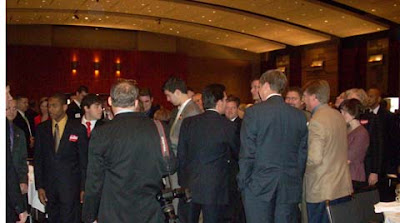 "America is the place of hope and opportunity -- the
only land where everything is still possible."
- Rep. Eric Cantor
(whose grandparents immigrated to Richmond from Russia)

The star of Friday's annual campaign breakfast was Rep. Eric Cantor (R-7th CD) ... and he did not disappoint. He was a gracious host, greeting supporters, sharing his thoughts and concerns in his remarks, and afterwards as he talked with those who waited in a long line to have a few words with their Congressman.

A walking example of the American dream, Rep. Cantor talked about his grandparents' immigration to Richmond from Russia and how his grandmother, widowed at an early age, worked hard to raise his father and uncle and sent them to Virginia Tech.

The event featured many of the who's who in Virginia Republican politics as 1,300 supporters gathered at the Greater Richmond Convention Center. Many businessmen were seen in the crowd and the timing was perfect because they could breakfast with the Congressman at 8:00 and then head off to work at their corporate offices around the Richmond area.

Volunteers, activists, Party leaders, and former elected officials were also there, mingling and networking with other Republicans interested in moving the Party forward after last November's historic sweep of Governor, Lt. Governor, and Atty General. Of those, only Gov. Bob McDonnell was absent, presumably on other business, while Lt. Governor Bill Bolling led the invocation and Atty. Gen. Ken Cuccinelli led the Pledge of Allegiance.

Barbara Comstock, newly elected into the House of Delegates, kept the breakfast program moving by acting as MC. I met Del. Comstock in December when we were in the buffet line together at the Williamsburg Lodge for Rep. Cantor's dinner during the Republican Advance, and we talked about the just-completed election and Northern Virginia politics (she won in Fairfax), the blogs, and the atmosphere in Washington and Virginia.

The breakfast program listed the "2010 Congressional Club," names from the Richmond community that are recognizable such as Bobby Ukrop and Bobby Thalheimer and Charles Luck ... but on the list was another name very familiar to me. John Cogbill was my boss when I was a 20-something working in Richmond but I was not able to find him in the crowded room.

I relished the opportunity to talk with Steve Rossie from the Family Foundation about the good job they are doing during the 2010 General Assembly session. (Steve was part of Bloggers Row at last year's RPV Convention.)

And of course fellow bloggers Jane Dudley at Bearing Drift and Tom White at Virginia Right! who already have posts up about the event. There were internet issues at the Richmond Convention Center so we could not live-blog as planned but it was a pleasure to be a part of such an exciting event. Many thanks to Jane and Tom and the Cantor campaign.

The last time I was in the second floor ballroom at the Convention Center was my daughter's home school high school graduation with Home Educators Association of Virginia so it was interesting to reflect on that while watching so many movers-and-shakers in Republican circles working the room.