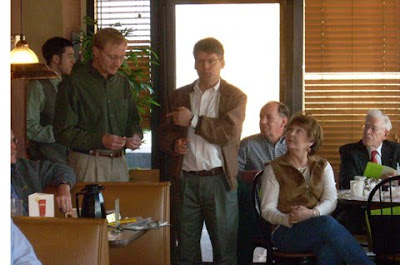 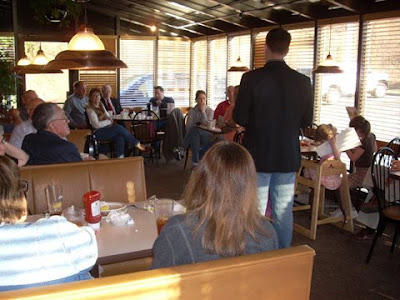 David Karaffa discussed the subject of the day ... health care. While many from breakfast had taken buses to DC to protest at the Capitol, those who were unable to go were at breakfast and heard from David who is a cardiac RN at Augusta Health and whose father is a neurologist. 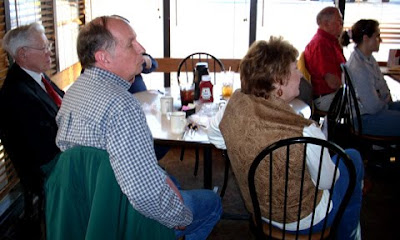 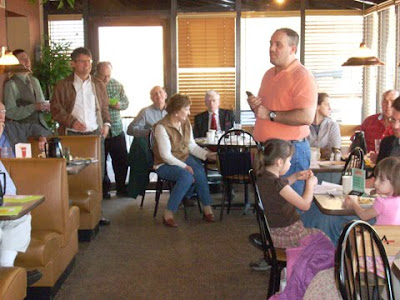 Jason Bibeau emphasized several points during breakfast and made such an impression that he was asked by an attendee if he would be willing to run for public office. 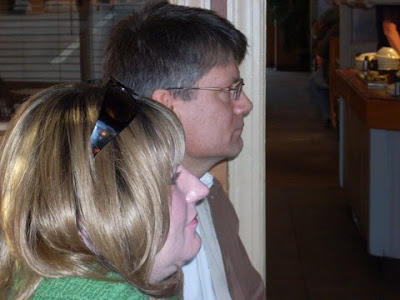 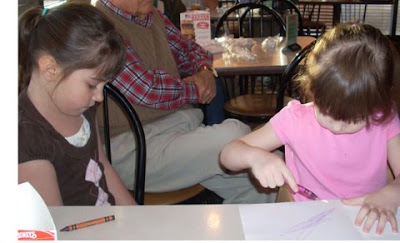 We are involved in politics because we care about the future of our children. These two patient little ladies enjoyed coloring during breakfast. 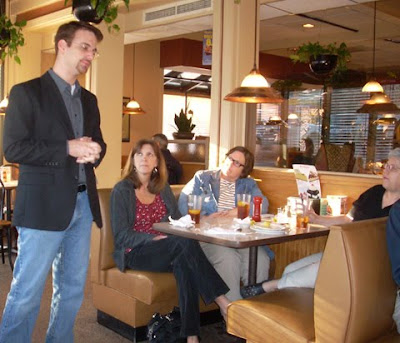 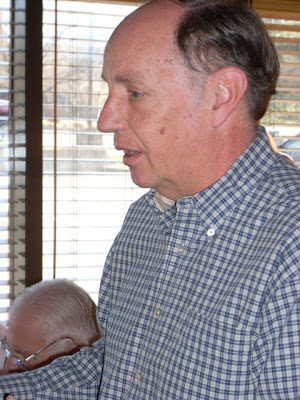 Bob Kirchman's suggestion that we all fall to our knees at noon on Saturday to pray for our nation was met with applause. 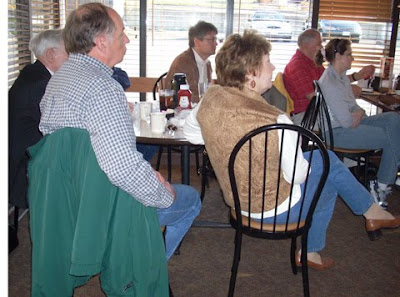 It was a good day of sharing information and fellowship with fellow Americans.

On the first day of spring, 100 Valley Americans headed to DC on buses to protest the impending health care bill and to make a final plea with Democrats determined to go against the will of the majority of Americans.

Independents, Republicans, Constitution Party, Tea Party Patriots, and others were encouraged to travel to DC if they were able while those who could not attend were at breakfast, praying for their friends and discussing health care, Congress, and their fear of what was about to happen to their country. Activist leaders Suzanne Curran, Lyn Bing, Sue Ward, and Constitution Party chair Dave Mason led the bus riders to DC. Thirty conservatives from the Staunton-Waynesboro-Augusta County area stayed behind and fellowshipped together at breakfast.

Thanks [to SWAC Breakfast] for being connected on this! We all do appreciate your 100% firm support [of the bus trip]. And I am sure that your sending out the clarion call over your list brings to you all a deep inner satisfaction.

And here's a hearty hello to you, Kurt.... I have spoken again, this very morning, with some of the folks organizing the buses. They tell me that many local organizations and groups in our area have responded by opening up to them their lists in support of the rally. It does seem that the coalition of common constitutional interest is emerging these days with greater solidity, is now working together better than ever! I know this to be true of the Constitution Party ... and also, and I say this with some great personal encouragement and inner satisfaction, across the board as well.

I have spoken with a representative of a local group organizing a forum having to do with the Constitution. From this conversation, among others, I notice that folks seem overall to have a sharpened awareness of the extremity of stakes now in play on the grand stage of national destiny. It's like the pot is at a boil ... but people are wondering, when is the lid going to come flying off? Apprehension is in the air.

Hold down the fort.

Breakfast was led by local conservative leader Kurt Michael who emphasized that the SWAC Conservative Round Table is not a political party or organization but rather a gathering of like-minded conservatives who care more about their country and community than they do about political labels.

Kurt laid out the three goals of SWAC Breakfast which are:

David Karaffa, who plans to run for the Augusta County Board of Supervisors in 2011, discussed health care and the alarm felt within the medical community about what Congress was about to pass in DC. David, who is a cardiac RN at Augusta Health and has a young family, showed the willingness of those who will step to the plate to run for elected office.

Trixie Averill, long-time in-the-trenches Republican activist, is running for Chairman of the 6th Congressional District and she addressed the group about her candidacy and included all she has done for the Party over her 20+ years of involvement. A military mom, see Trixie's vision for the 6th District. She was personally endorsed during the meeting by Kurt Michael, Jason Bibeau, and Lynn Mitchell.

Alex Davis announced his candidacy for Chairman of Staunton City Republican Committee, and was endorsed by Kurt Michael and Lynn Mitchell. He became involved in 2004 during the George W. Bush reelection campaign as a Teenage Republican at Lee High School, and has worked every campaign since.

Mark Daugherty, Treasurer/Secretary of the Shenandoah Valley Tea Party Patriots, announced upcoming events: April 1 - Staunton Tea Party meeting at the Staunton Library, 7-8:30 pm; April 15 - Staunton Tax ay Tea Party Rally at Gypsy Hill Park, 5:45-7:30 pm; April 15 - Harrisonburg Tax Day Tea Party Rally at Courthouse Square, 5:30-7:30. Our thanks to Suzanne Curran, Sue Ward, and Lyn Bing for arranging buses to DC on Saturday and, while we missed them at breakfast, we were thankful for their willingness to continue the fight for freedom.

Lynn Mitchell, 6th District Representative for RPV, passed out copies of phone numbers of the four Virginia Democrat congressmen (Nye, Connolly, Perriello, and Boucher) and urged folks to call and ask them to vote "no" on the mandatory health care bill. She passed along that volunteers had read the health care bill out loud through RPV's "Read the Bill" earlier this week, noting that it took from Wednesday morning at 8:00 until Friday afternoon to real all 2,409 pages.

Bob Kirchman asked that Americans hit their knees in prayer at noon on Saturday to pray for our nation and our leaders at a critical point when Democrats are poised to change our very lives.

Our thanks to all who came out Saturday. Also ... Shoney's Restaurant could not have been more accommodating or friendly. The wait staff was excellent as they took care of us, and we would like to thank them for their hospitality.

Keynote speaker David Barton is Founder and President of Wallbuilders and widely recognized as America's foremost authority on our Christian heritage adn the faith of our founding fathers. Mr. Barton speaks to hundreds of groups on our country's religious roots and the role individuals can play in reclaiming America's spiritual heritage. He has written numerous best-selling books, is a nationally acclaimed speaker, and has won numberous awards, including the DAR's highest honor, the George Washington Honor Medal.

Contact: Lynn Mitchell (SWAC.girl@gmail.com). We have two tables reserved and will get more if needed. One table is full. Please join us for this inspirational evening.

Dave Mason, Chairman of the Constitution Party, was in DC with the marchers but we wanted to let folks know his next meeting is Thursday, March 25, at 7:00 pm, at the Spring Lakes Clubhouse in Staunton.