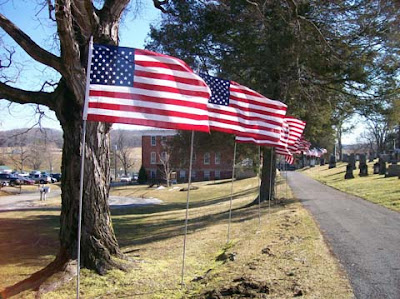 
Four years ago today, 19-year-old Lance Corporal Daniel Morris from Virginia's Shenandoah Valley gave the ultimate sacrifice for his country on a faraway battle field during Operation Iraqi Freedom. It would be days before his body was returned to Augusta County but, when it was, a community turned out to honor and thank a fallen hero and his family.

Buried on an unusually mild and windy February day, hundreds attended the funeral as cars were backed up on the road 45 minutes before the 11:00 service at a small historic rural church. Mourners filled the sanctuary and balcony, and overflowed onto the grounds.

Standing guard outside, as they had at the funeral home the day before, were the Patriot Guard riders standing at attention with bowed heads as they held American flags that flapped in the stiff breeze. Along the driveway leading up the hill to the cemetery overlooking the church yard were more American flags, a tribute to a hero who now rests on that Virginia hillside.

A front page story today by reporter Bob Stuart at the Waynesboro News Virginian is a reminder of the loss that is still very fresh to the family but also a reminder that Morris' sacrifice has not been forgotten. Not only do Morris' family and friends as well as the SWAC community remember but a foundation in Pennsylvania, named for another fallen Marine who was killed in Iraq two months after Morris, remembers, too:

Mike Walsh, the foundation’s director of development, said the foundation’s goal is to encourage disabled veterans to perform community service in memory of a fallen veteran.
The family of late Marine Corps officer Manion started the foundation after he was killed in Iraq in 2007.
For the next several months, retired Marine Corps Sgt. Dwayne Malone will volunteer at the Smith Recreation Center in Fort Benning, Ga. in honor of Morris.
And each month, Malone will send a 500-word update on his service to [Daniel Morris' mother Carol] Moneymaker.
Malone was struck by a car and disabled after returning home from Iraq. Malone had to learn how to walk and talk again, Walsh said.
“Our motto is to honor the fallen by challenging the living,” Walsh said.

We owe a debt of gratitute to Tavis Manion and all he and his family sacrificed for our country.

And we remember Daniel Morris whose memory lives on ... his service is still remembered. Thank you. Semper Fi.
Cross-posted at Virginia Virtucon