Back to the Augusta redistricting table 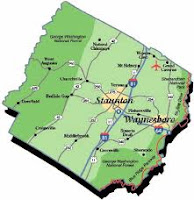 The clock is ticking on redistricting in Augusta County, as noted by reporter Bob Stuart writes at the Waynesboro News Virginian. Monday's staff meeting for the seven Board of Supervisor members showed there is much disagreement about the proposed lines on the four redistricting map options presented thus far so county planner Becky Earhart will be presenting a fifth option to try and satisfy everyone.

That's a tall order. Various supervisors like one of each of the four options currently presented.

As with every other locality in the Commonwealth, residents of Augusta County are waiting for the redistricting lines to be drawn to reflect the increase of 8,000 new residents over the past decade.

More importantly, however, candidates who wish to run for supervisor positions in the seven districts have been waiting to see if they will remain in their districts or be redrawn into another. After Monday's meeting, it's obvious they will have to wait a while longer before gathering lists and walking door-to-door for campaigns that may clearly favor incumbents.

The board, currently made up of one Democrat, two independents, and four Republicans, is a study in contrasts. The three supervisors who appear to be leaning toward an Option 4 or a yet-to-be-drawn Option 5 are one independent and two Republicans.

Pastures Supervisor Tracy Pyles, the lone Democrat who has represented his district for 12 years, lives on the line with North River District and stands the chance that his fellow supervisors will draw him into another district. The first four options leave him intact but a newly-drawn Option 5 may accomplish what the others did not. For the record, he prefers Option 1.

The urban Beverley Manor District could see the incumbent's two opponents redrawn into other districts on a new Option 5 map, and one of them is booted from the district in the incumbent's preferred Option 4 map.

South River District keeps its older supervisor intact in all four map options. Option 4 would move the 27-year-old Beverley Manor challenger, an energetic charismatic cardiac RN at the local hospital, into South River to face the incumbent who may feel comfortable in a district he has represented for a total of 24 years.

What is interesting about it all is that Option 4 was drawn as an "out-of-the-box" map that showed what it would take to keep all the local communities together but didn't really seem to be the one that would be considered. After Monday's meeting, three supervisors expressed satisfaction with it while asking for Option 5 with some slight variations.

None of the current supervisors have announced if they are running for reelection while two challengers have already announced. Will the incumbents try to draw the lines to remove their competition? Will the 2011 redistricting be politics as usual?