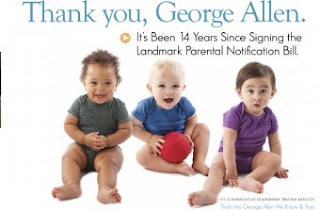 What's not to like about U.S. Senate candidate George Allen's first campaign mailer that was sent out statewide? Besides the photos of babies on the front cover, the four-fold brochure reminded voters that, "As Governor, George Allen made history by signing the first-ever parental notification bill -- passed through a Democrat controlled General Assembly. This landmark legislation requires a physician to notify at least one parent or guardian before performing an abortion." Legislators had been trying to pass that parental notification bill for 18 years in Virginia but it failed. Then Virginia elected George Allen ... and it became law.

It also reminds that Allen co-sponsored a partial-birth abortion bill: "George Allen earned a 100% rating from the National Right to Life committee while serving in the U.S. Senate. From co-sponsoring the ban on partial birth abortion, to opposing federal funding for overseas organizations that fund abortions, Allen was a leader protecting the sanctity of life. He also continued his efforts to empower parents, co-sponsoring legislation to prohibit taking minors across state lines to circumvent state parental consent or notification laws."

Conservative leaders endorsed him, such as Kay Cole James, his Secretary of Health and Human Resources as Governor, said, "As Governor and Senator, George Allen has always stood strong for Virginia families. He has a proven record of defending the rights of the unborn and we need his pro-life leadership in Washington, D.C. Please join me in supporting him."

Louise Hartz, former President of the Virginia Society for Human Life, said, "Please join me in supporting George Allen for the U.S. Senate. He has consistently supported pro-life issues and always stand up for the unborn. His conservative leadership is needed more than ever in Washington, D.C."

Former Delegate Tom Gear wrote, "As Governor, George Allen used his veto power to ensure a true Parental Notification bill became law. He stands firm when others may waiver. George Allen will be a champion for Virginia families in the U.S. Senate."

Others who noted the poll included the Washington Post, writing, "... a new poll shows former senator George Allen in a strong position in the Republican primary." The Hill commented, "... the poll found Allen with a sizable lead among independent voters, 50% to 41% [over Tim Kaine]."

Last but not least, the Washington Examiner noted, "Though it is early in this race, the poll seems to confirm that Virginians are still eager to have George Allen in leadership."

George Allen weighs in on his family values beneath a picture of him with his wife Susan: "The family is the bedrock of society and the backbone of our economy. For generations, loving, caring families imparted to us and our forebearers the very values that made America good: individual initiatives, personal responsibility, honesty, hard work, compassion for those less fortunate, and of course, faith in God."

It's a good, solid campaign piece that is sure to impact those who receive it.