Kurt Michael announces for Augusta County Board of Supervisors 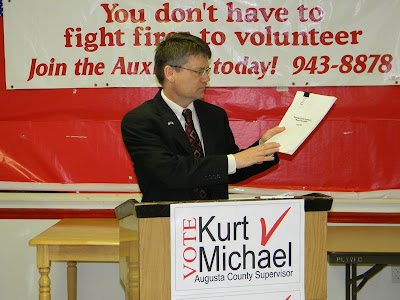 On Saturday morning, over 30 enthusiastic supporters attended Fishersville resident Kurt Michael's announcement to run for Wayne District supervisor on the Augusta County Board of Supervisors despite the rain, wind, and flash flood warnings. Kurt's remarks were well received and the group ended up afterward in the private dining room at Shoney's restaurant.

Here is the press release with Kurt's background.

Below is a copy of Kurt's remarks.

Introduction
Thank you for coming out this morning. I'd like to introduce some people.

If you had asked me six months ago if I was going to run for the Board of Supervisors, I would have told you no.

However, since last summer, I have been involved with the Yancey Fire Department issue and have been encouraged by many people to run for supervisor.

Fire and emergency services
As many of you may know, Yancey Fire Department has been scrutinized by many. I have talked with volunteer and career firefighters, citizens, and county personnel, and have come to the conclusion that many of these issues could have been avoided.

As Wayne District Supervisor, I will work to improve our fire and emergency services, and will be a voice for both the citizens of the Wayne District as well as volunteer and career firefighters.

Fixing fire and emergency services will come with a price tag. You ask, where will the money come from? Where will we get the money to fund our fire departments, better our schools, and improve our infrastructure?

Economic Development
These services can be funded if we aggressively pursue economic development.

Augusta County is located at the intersection of two major highways, has access to rail, and a regional airport. We are one of the few counties strategically positioned for business and industry.

As a teacher, I have heard from parents that their children are graduating from college and cannot come back to this area. Why? Because of the lack of good paying jobs in Augusta County.

My neighbor drives an hour both ways each day to the West Virginia line just to bring home a paycheck.

Many of my friends drive over Afton Mountain to Charlottesville just to bring home a paycheck.

Wouldn't it be nice if those jobs were here in Augusta County?

And with jobs comes revenue. And that revenue will fund our fire departments, better our schools, and improve our infrastructure.

Closing remarks
I ask for your support. Please vote November 8th for Kurt Michael for Augusta County supervisor. Thank you for coming out. 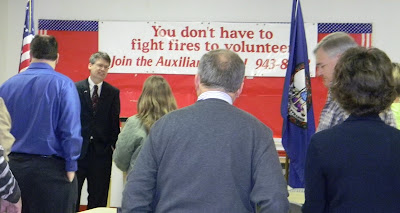 Email ThisBlogThis!Share to TwitterShare to FacebookShare to Pinterest
Labels: Augusta County Board of Supervisors, Kurt Michael