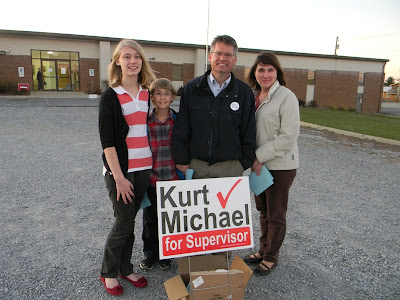 Kurt Michael campaigning at Fishersville precinct with his family.


After running for Wayne District supervisor, Kurt Michael has found himself in a strong position to continue in whatever direction he chooses -- elected or grassroots or other leadership.

On a hot summer afternoon in late July of 2011, as the temperature hovered around 98 degrees, residents of the Fishersville area of Augusta County, Virginia, saw a man walking the streets of Teaverton, knocking on doors, with literature in one hand and a note pad in the other.

Former Augusta County Republican Committee Chairman Kurt Michael had begun a journey that would take him from the sweltering days of July to the cold days of November on his quest to seek the Wayne District supervisor position in Augusta County.

Concerns about the failed Yancey Fire Department ISO rating in 2010, an urgent issue that put the lives of families in his neighborhood and elsewhere in danger, spurred him to seek office.

As president of the Emerald Hills Homeowners Association, Kurt and four other homeowner presidents attended supervisor and fire meetings  in 2010 and 2011 to pressure supervisors to bring the area's fire and emergency services up to standard. They were successful ... more full-time firefighters were hired and an ambulance, not available before, was located at Yancey to benefit the ever-growing urban Wayne District.

Election night as he watched the results with fellow candidate and Supervisor-elect David Karaffa as well as a room full of friends, the final tally showed he fell just 126 votes short of what he needed to win with a total of 888 to Jeff Moore's 1,014.

Almost 1,000 people had voted for this military veteran and Governor's School teacher who had taught many of their children -- indeed, he had taught his opponent's son.

In the 3 1/2 months that Kurt walked -- almost every day for two hours or more -- he knocked on over 3,000 doors, talked with hundreds of citizens, and got more than 4,500 pieces of literature out to the voters.

Against a home town boy who was described by the News Leader as the candidate "handpicked by outgoing Supervisor Wendell Coleman," Kurt rallied 47% of the vote as well as endorsements by both area newspapers -- the Waynesboro News-Virginian and the Staunton News Leader. His podcast interview at the News Leader showed his impressive understanding and knowledge of the area's fire concerns, comprehensive plan, and small area development plan for Fishersville.

While he carried the Fishersville and Wilson precincts, his shortfall was the rural Dooms area north of Fishersville, an area he walked, much to the surprise of homeowners who noted no candidate had ever come to their doors. However, in a redistricting year that saw much confusion about redrawn district lines, the State Board of Elections' lack of an updated list, making it necessary to work from the old one, made it impossible to know all the boundaries.

Running as one of four Independent candidates, Kurt ended up with an impressive finish and, along with the other three Independents who won their races, has been left in a good position to continue on in whatever he desires whether it's public office or the grassroots work he had done for 20 years.

A former Fairfax City Republican chairman while still in his 20s, Kurt fought for conservative causes in Northern Virginia. Ten years ago he continued those causes after moving to Augusta County to teach at the Shenandoah Valley Governor's School.

His activism on behalf of the citizens of Augusta County is impressive:


2005: When Staunton City's school board threatened to remove Weekday Religious Education  (WRE), Kurt worked with then-WRE president Jack Hinton, now deceased, to organize local churches and conservatives to rally more than 500 residents who attended a school board meeting to save WRE. His contacts with Northern Virginia attorney Gil Davis paid off when Davis represented WRE pro bono at the next huge school board meeting that was covered by CNN and other news outlets. WRE was saved in Staunton and the surrounding area where it remains part of the schools.

2007: He joined every other grassroots leader across the 24th Senate District to support a challenger to incumbent Sen. Emmett Hanger after Hanger's continued support of tax hikes and after he had joined with then-Gov. Mark Warner and the Democrats to pass the highest tax increase in Virginia history. The opponent garnered an impressive 47% of the vote against Hanger who had been in politics for 30 years.

2007 and 2008: When an adult entertainment business moved into Staunton, Kurt teamed up with now-Staunton City Councilwoman Andrea Oakes to work with City Council to pass ordinances to regulate where such businesses could locate, preventing them from being near schools, neighborhoods, churches, and other locations. It passed, and then he worked with the board of supervisors in Augusta County to pass a similar ordinance.

2009: When hundreds of Augusta County residents revolted over flawed real estate tax assessments that were based on overly-inflated numbers even after the real estate bubble had burst and home prices were plunging downward, Kurt joined ranks with Churchville attorney Francis Chester to ask supervisors to roll back assessments to the fairer earlier numbers until a follow-up assessment could be done. With Kurt's help, over 1,000 residents turned out for a supervisor meeting where they allowed only 50 citizens to address the board and ask for new assessments.

2010: The publicized ISO failed rating at Yancey Fire Department in Fishersville had Kurt once more standing up for the citizens of his district and Augusta County as he spoke out for more paid firefighters and better emergency services in the densely-populated Fishersville area.

In an atmosphere where many are apathetic toward what is occurring in their communities, Kurt has always been involved as an activist on behalf of the citizens. Throughout, he was also serving as chairman of the local Republicans, recruiting candidates, helping electeds, helping to organize and participate in support the troops rallies, and working with people in the community. He continues to serve on the State WRE Board and is very involved in his church as well as other volunteer work.

On election night, Kurt placed a call to Jeff Moore to congratulate him and followed up with a post on his Facebook page:


"Congratulations to my opponent, Jeff Moore, on his election as Wayne District Supervisor. The final vote count was 1014 to 888 (just 126 votes short). I want to thank all my supporters, friends, and family for all of the support they gave me throughout this campaign.

"With the help of friends, I knocked on over 3000 doors, got more than 4,500 pieces of literature into the hands of voters, found 100 yard sign locations, and talked with hundreds of voters. Jeff and I ran clean races based on the issues. I look forward to taking a little time off before beginning the next phase of my journey. Thanks again for all the support and congratulations to my opponent Jeff Moore."

There has been an outpouring of responses on Facebook as well as emails and phone calls from friends and neighbors grateful for his willingness to run, but perhaps a note from current Supervisor Tracy Pyles, who was successful in his reelection campaign and in shifting the direction of the board, says it best:


"Kurt, you ran a strong, high-minded race. I learned much from you in our six-month quest to change the Board. And 'we' did. Augusta Governor School kids are better off with you as a teacher and Augusta County is better off because you cared and you tried. Tracy"

Because of the voter results, the campaign that had begun on that hot summer afternoon in July has come to an end ... but the journey continues. 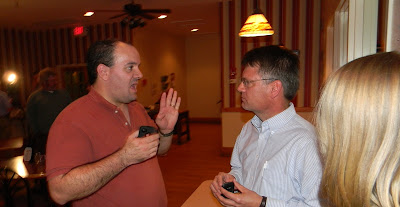 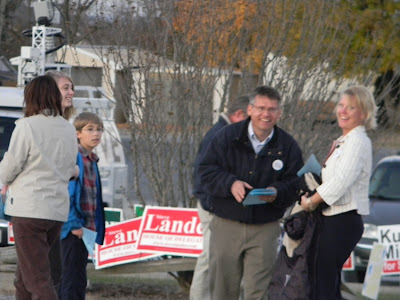 Head cheerleader Vonda Lacey working the polls with her #1 candidate. She was treasurer of Kurt's campaign. His wife and two children are on the left handing out literature. 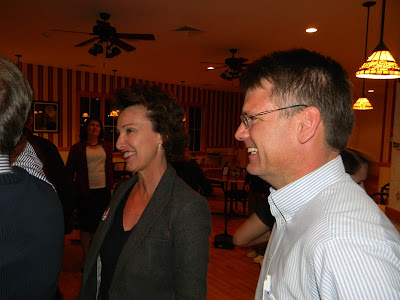 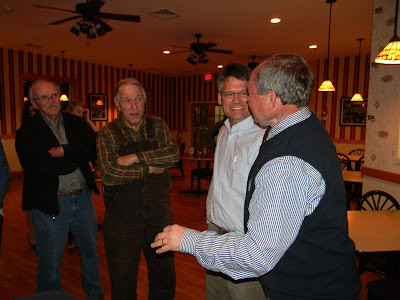 Supervisor Tracy Pyles thanks Kurt for being the man in the arena.