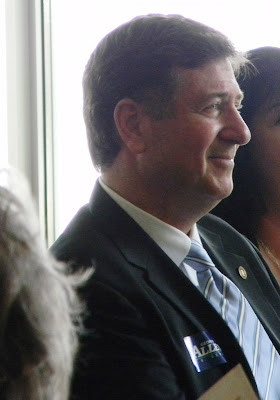 George Allen smiled as he listened to Lt. Gov. Bill Bolling introduce him Thursday at Denny's Restaurant in Mount Jackson, Virginia, at the beginning of his two-week "Send a Message" tour, a two-week trip around the Commonwealth rallying Virginians to send a message to President Obama, Tim Kaine and their Washington allies by giving George Allen an important victory in the Republican Primary on June 12. 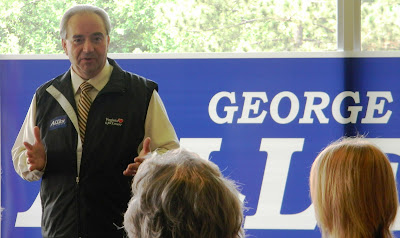 Lt. Governor Bill Bolling joined Allen in this get-out-the-vote luncheon where enthusiastic local residents came out to support George Allen to help send a message on June 12. Bolling introduced Allen and shared how the two men have supported each other throughout the years.

“Our country is at a crossroads on freedom – the freedom to work, invest, harness our energy and chart our own lives through personal responsibility,” said Lt. Governor Bolling. “This election is too important to sit on the sidelines, and it’s time for Virginians to send a message by rallying behind George Allen’s proven leadership, positive vision and powerful ideas for an American Comeback.  He is the only candidate in this race with the record of creating jobs, reducing regulations, cutting taxes and fighting Washington waste. George Allen is the right leader for Virginia in the U.S. Senate.” 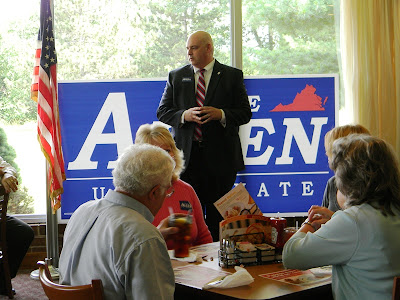 Del. Todd Gilbert joined George Allen and Bill Bolling for the kick-off of the "Send a Message" tour. 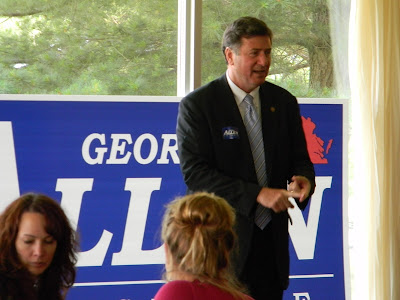 “Virginians have been hurt by the failed tax, regulate, spend, borrow and print policies of President Obama and Tim Kaine. And we’re here to send a message on June 12 that we Virginians want more freedom and opportunity and less government meddling in our lives and businesses,” said George Allen.

“I’m grateful for the support of Bill Bolling and thousands of grassroots advocates who share my vision of a better future than what we are enduring these days. I’m positive about America’s future because this election we can choose to reinvigorate the entrepreneurial spirit of our nation through responsible tax, reasonable regulatory and empowering energy policies that free job creators to invest, grow and create new jobs.” 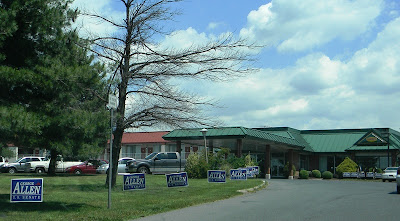 Kudos to Denny's for the fantastically large private dining room with floor-to-ceiling windows overlooking the Shenandoah Valley countryside and mountains in the background. The service was excellent and the staff was very friendly and quick with food orders.