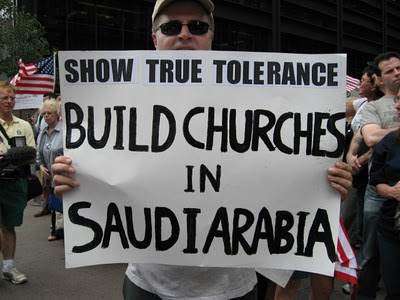 Thousands turned out for Sunday's rally in New York City to protest a proposed 13-story Islamic mosque and center within sight of Ground Zero. Protesters included NYPD, firemen, and families of those killed by terrorists on September 11, 2001.

Here are some links with photos, video, and reports from the event.

Pamela Geller was an organizer and has photos and commentary at Atlas Shrubs.

America ... home of tolerance. As Phil, NYPD cop during 9/11, mentioned and the photo above says, let's see a little tolerance and equality by allowing churches in Mecca.

Hypocrisy makes a mockery of tolerance.

Email ThisBlogThis!Share to TwitterShare to FacebookShare to Pinterest
Labels: 9/11, hypocrisy, war on terrorism