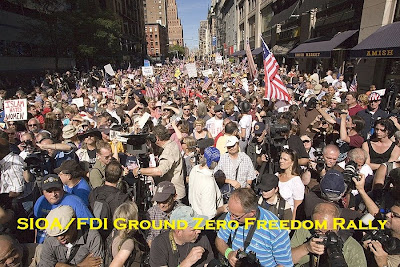 Photo by El Marco
One of the powerful writers in the national blogosphere, Dr. Donald Douglas, has photos and commentary at his American Power blog commemorating yesterday, September 11, 2010, as he walked the streets, saw the sights, heard those who lost loved ones, photographed those who love America ... and those who are now known as the "9/11 Truthers."

Flying from California to New York, Donald attended the Ground Zero Mosque rally to protest the building of a Muslim mosque so close to Ground Zero along with 40,000 other people, as documented by Pamela Geller at Atlas Shrugs with tremendous photos by El Marco. Check it out for the news the news doesn't cover.