Saturday's luncheon with Bob McDonnell at Rowe's Restaurant in Staunton was a huge success with 70+ people attending. We crammed everyone into the large private dining room and the conversation was lively as old friends visited, new friends were made, and many political contacts took place as business cards were exchanged. Lunch was plentiful with vegetable-beef soup, club sandwiches, pie, and beverage. 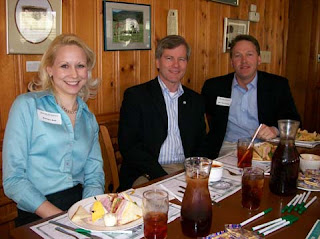 
At the head table were Attorney General Bob McDonnell, Delegate Chris Saxman who hosted the event, and Whitney Duff who heads up Americans For Propersity - Virginia (AFP), the nationwide tax watchdog group. 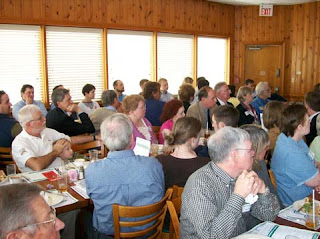 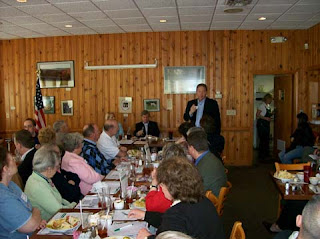 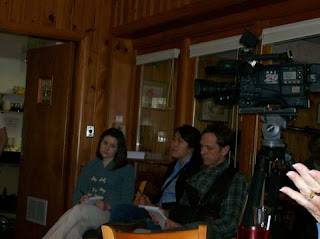 Whitney Duff welcomed everyone. Lynn Mitchell led the Pledge of Allegiance. In a townhall-style setting, remarks were made by Delegate Saxman and AG McDonnell with questions taken afterwards from the audience.

[The following is a paraphrasing of the remarks made by Delegate Chris Saxman and AG Bob McDonnell as taken from my notes.]

Delegate Saxman opened by saying our nation is at fiscal risk due to increased spending. He advocated taking a businessman's mentality to Richmond to control spending and avoid increased taxes. He has worked closely with Americans For Prosperity and has been a leading proponent in the "no tax increase" force in the House. He thanked Bob McDonnell for being a mentor for the 21 delegates in the freshman class of 2002.

Bob McDonnell addressed the issue of spending and economic responsibility, saying the first expedition commissioned to the New World by King James in 1606 was an economic as well as freedom mission. He said it's a great time to be a Virginian, and listed his top three issues:

1) Respect for property rights: Citing "Kelo vs. New London," he expressed disappointment that "public use" had been expanded from public roadways, schools, and such to condemning private property for private use such as shopping centers.

2) Reduce the regulatory system: Also known as "hidden taxes." Forbes Magazine called Virginia the most business-friendly state in the nation but there are 24,000 pages of regulations for those businesses. He proposes beginning with small business, health care, and agriculture by reducing regulations on those three.

3) Spending control/budget reform: The state budget has doubled in the past ten years, growing at twice the rate of inflation.

Grassroots organizations such as AFP can have a fundamental difference in spending and in who serves, he said.

A variety of interesting questions, fielded by AG McDonnell and Delegate Saxman, came from the audience. A full two hours after beginning, the luncheon ended and folks stood around and visited, talked with the electeds, and fellowshipped for a while longer.

Our thanks to the Attorney General, Delegate Saxman, Whitney, and AFP for an informational townhall meeting and lunch. 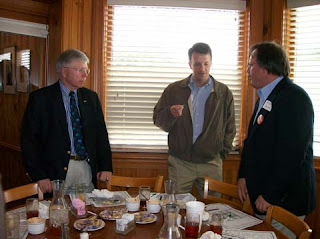 Yet another local political event I missed....and I would have liked to have met Chris Saxman, too.

I need to find out how to get in touch with him, because there is an idea I have for a new traffic law that involves trucks going up and down Afton Mountain.