Campfires, s'mores, and the mountains.... 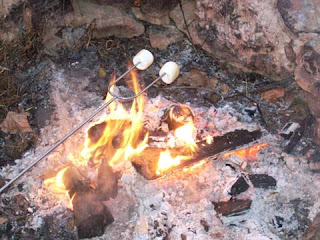 SWAC Niece and SWAC Daughter roasted marshmallows around the bonfire last night as they assembled s'mores for anyone who wanted them. 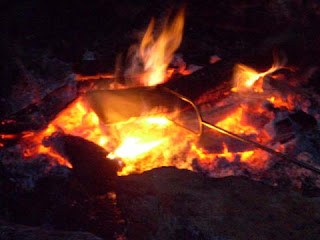 As darkness settled in around us, the blazing fire was mesmerizing as we sat and watched the flames while listening to the night noises around us.

What is it about campfires that is so relaxing? SWAC Niece is in town to visit so we grilled yesterday, eating outdoors and enjoying another nice day in the Valley. We started the bonfire early to build up some coals for roasting marshmallows for those who wanted s'mores after dinner.

As darkness settled around us, we pulled our chairs in closer to the fire ... there was a damp coolness to the air as we pulled on sweaters and watched the full moon rise over the ridge. Then the guitar came out and SWAC Niece went through her list of campfire songs since they were fresh in her mind from camp earlier in the summer. That was followed with some John Denver tunes that never grow old, a little Woody Guthrie, some folk music of the region ... it was a peaceful evening.

It's late summer in the Shenandoah Valley....

You should have joined the Dems at Paint the Valley Blue - they love Woody Guthrie as one of their own. It was pretty amazing to hear nearly 500 voices raised singing "This Land Is Your Land."