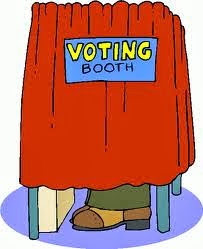 It's Election Day 2013 in Virginia. The polls are open ... voters are voting, candidate supporters are greeting them, and volunteers are sending them out the door with "I Voted" stickers.

The weather is good ... a cold, frosty start to the day with temps in the 20s is expected to lead to a high in the 50s under overcast skies.

What an odd year it has been with some newspapers refusing to endorse anyone for governor while others encouraged write-in votes for Lieutenant Governor Bill Bolling. Many are happy to see this election cycle finally come to an end.  For many, it marks the finish of the daily barrage of campaign emails, robocalls, and television ads.

Virginia is being considered a bellwether for the country. The tea party and Libertarian wings of the Virginia Republican Party have their dream team of candidates in Ken Cuccinelli, E.W. Jackson, and Mark Obenshain for governor, lieutenant governor, and attorney general. Four years after the Republican team led by Bob McDonnell and Bill Bolling swept into office with historic leads, will it happen again?

This is a notoriously red area of the Commonwealth so what's going on in the central Shenandoah Valley area that includes Staunton, Waynesboro, and Augusta County? I'll pass along news as I hear it.

10:15 a.m.: Churchville precinct had light but steady turnout. The voting location within Churchville Elementary School had been moved with only one table for check-in as opposed to the usual two. About half a dozen people were in line to sign in; two machines were in use. Interestingly, there was a card table set up with a McAuliffe sign and materials but no presence from the Republicans.