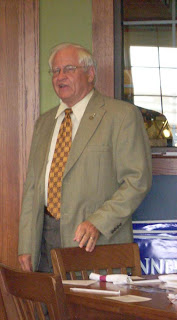 Pat Mullins, candidate for Chairman of the
Republican Party of Virginia. 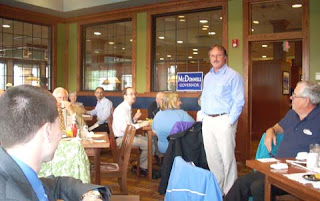 Mike Meredith, chairman of Rockingham GOP, introduces Pat Mullins to the lunch crowd of about 40 Republicans. 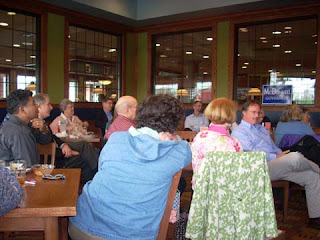 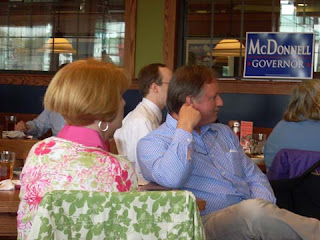 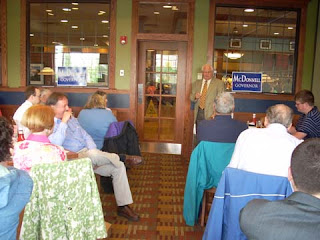 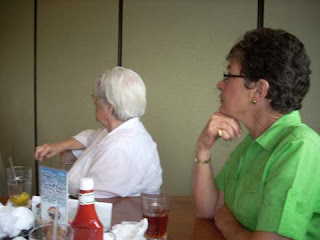 The Republican Party of Virginia is in need of a chairman and leadership. There is someone willing to take on both those roles.

It was a good group of about 40 today for the Harrisonburg-Rockingham GOP's "First Friday" at Wood's Grill. The guest of the day? Pat Mullins, the only candidate to declare for chairman of the Republican Party of Virginia.

He was entertaining, he was interesting as he talked about his past work for Fairfax County and Louisa County GOPs, and he was enthusiastic and excited about the future direction of the Republican Party. Introduced by Mike Meredith, Mr. Mullins laughed as he grasped a purple "DUKES for Bob McDonnell" bumper sticker, saying his daughter had attended James Madison University.

Many know of his years as chairman of the Fairfax County Republican Committee, a large committee with 580 members and large fund raisers. He spoke of his years of helping the county support Republican candidates including George Allen ... they won elections by sticking to their core conservative beliefs.

Saying he is excited about being a Republican, and that this year we have great candidates, Mr. Mullins emphasized three points that he sees as important to turn Virginia red again:

1) Reach out to various communities;
2) Win elections including holding onto the House of Delegates;
3) Raise money.

Pat Mullins is personable, capable, has a proven track record of grassroots work and fundraising, and has the support of his family and many in the Republican Party who have worked with him throughout the years.

As an interesting side note: There were three bloggers in the room from the 6th District.