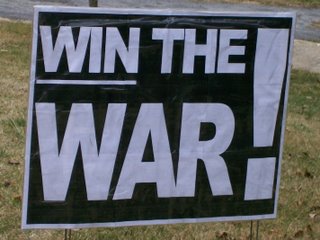 Silent Majority beginning to speak up....

My telephone rang at 7:30 this morning. It was the manager of a local store that I frequent and, when I answered, he very boisterously said, "Good morning! I want one of those signs!"

I knew the story had hit the morning newspaper.

Earlier this week I submitted letters to the editors of local newspapers asking folks to put an electric candle in their windows if they supported the troops.

Frustrated with the lack of accurate coverage in the news and left with no voice in the mainstream media, local residents had discussed how they could publicly show support for the troops, the war, and President Bush.

A friend called with the idea of the candles in the windows. Another friend contacted me about a WIN THE WAR sign he had put together after watching the President's speech asking to send 20,000 additional troops to Iraq.

The sleeping giant known as the Silent Majority was beginning to stir....

A reporter with the Staunton News Leader called after reading my letter to the editor and was interested in pursuing the story. After explaining how the idea came to be, I put her in contact with other area residents. She contacted them and talked with them about their reasons for displaying candles in their windows and signs in their yards ... and put together a story that appears in today's edition, Candles support troops; signs call for victory.
The reporter talked with a 22-year-old who has a candle in the window for her friend, Lance Cpl. Nate Salatin of Augusta County who is currently deployed to Iraq ... she talked with the mother of a 22-year-old Army lieutenant who will most likely be deployed to Iraq within the year ... and still another who was the mother of a young man who recently returned after deployment to Afghanistan. All strongly back the troops ... all believe in the mission ... all understand and support the President.
More about candles in the windows and WIN THE WAR signs can be seen here, here, here, and here.
Update: New related story here.
"I will not forget the wound to our country and those who inflicted it. I will not yield, I will not rest, I will not relent in waging this struggle for freedom and security for the American people."

"Freedom itself was attacked this morning by a faceless coward, and freedom will be defended."

I wouldn't mind getting a sign like that for my front yard. Where do you get them at?

Yes, you'll put up candles, but God forbid any one raises the idea of taxes to pay for the hundreds of billions of dollars to pay for this war (you know, which actually accomplishes something? The war doesn't magically pay for itself), then you demonstrate that you have no interest in real sacrifice, just empty rhetoric.

Steve, thanks for your interest in the WIN THE WAR signs. My contact information is in the News Leader article - link provided in this article. Please feel free to give me a call if you're interested in a sign.

Dignan, such a negative attitude you have....

Have you overlooked the cost to this country from 9/11 itself? Our financial markets were about to crash, the airline industry just about went under ... but most people have forgotten about all that. We had to recuperate from that as well as military costs to go after those who were behind the 9/11 terrorist attacks. By offering tax cuts the President actually stimulated the economy, thus generating more income.

My "empty rhetoric" is not that at all. I don't know your age but I remember Vietnam ... and that war was lost on the home front. Defeat the morale of those at home by constant negative pounding about the war ... and you can successfully call for an end to the war. The same playbook is being used today by the liberal media and anti-war protesters.

By displaying WIN THE WAR signs it is a morale booster not only for those of us here at home who want to publicly show our support ... but it is also a morale booster to our military men and women halfway around the world who see the negative reports through the MSM which make it look as if the entire country is against the war and, therefore, against the soldiers.

If you don't think the military feels that way when you guys protest or put up End the War signs then you need to read my "Conversation with a soldier, Part 1 & 2."

I am amazed at the people who have called or emailed to thank us for doing this because they were frustrated and didn't know how to show their support. END THE WAR signs have been around for over a year ... we're fighting fire with fire.

I think you'll find that dignan is the one with the empty rhetoric, SWAC Girl. When presented with facts that can completely be backed up and researched, dignan is unable to come back and he is beaten. You're a joke dignan. A joke. You are also a cheese-eating surrender monkey.

Are you really childish enough to pretend that Bush's TAX CUTS paid for the war? Maybe you missed Bush's appointee Ben Bernanke, the Chairman of the Federal Reserve, testifying last week how the tax cuts don't even pay for themselves, they drain money from the treasury. That would be the Republican Chairman of the Fed. You would be an idiot. Grow up.

Dignan, you must be very young because you cannot conduct a debate with someone in a reasonable way without mocking and making fun. I've read similar remarks from you on other sites where you seem to only be capable of calling names and insulting people.

My suggestion would be for you to research a bit more than the obvious in front of your nose. You may find I'm not as ignorant as you seem to think. Meanwhile, please try to have some manners while commenting on my site. Using names like "idiot" and suggesting I "grow up" will not advance the dialogue. Try to debate like an adult.

Well, looking at these last two posts,
"swacgirl", I'm the one who made a substantive point (that it's absurd to state that Bush's tax cuts paid for the war) and cited actual authority, and you're the one who didn't.

And if you actually cared about being right in anything you talked about, maybe you'd think about how stupid your statement was.

You just proved my point again ... which brings me back to my question of, "How old are you?"

Old enough to understand that Bush's tax cuts didn't pay for the Iraq war. Hmm ... you still have no response to that ...

Do you ever get embarrassed when you say stuff like that, or are you so completely delusional that it doesn't register?

Still waiting for that substantive respone to my point, o mature one...

You proved my point once again ... you cannot rationally debate without sinking to demeaning remarks.

I find that sad since so many of the liberal bloggers have that problem while the conservative bloggers rationalize and present issues without negative personal attacks.

dignan, again, you are a cheese-eating surrender monkey.