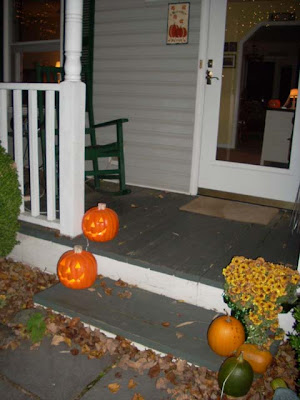 The pumpkins were glowing ... the spooky music was playing ... candy was waiting for the little goblins to arrive. 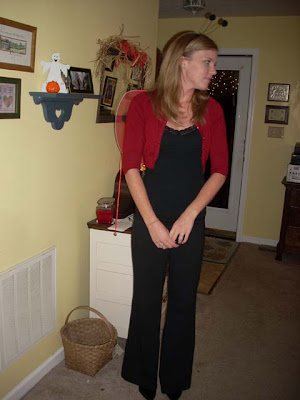 SWAC Daughter donned her ladybug wings
and headed out to join friends.

After spending the day in Front Royal at a rally with fellow American patriots, SWAC Husband and I arrived home at 6:10 just as the first two trick-or-treaters were heading to the front door. We pulled into the driveway and I called over to them, "We've got candy in the car."

Even though we had candy at the house, we had picked up an extra couple of bags to be sure we didn't run out. The pirate and wrangler who looked to be around 12 years old were properly treated and wished a Happy Halloween as they headed back toward the street.

Before we could unload the flags from the rally, two more trick-or-treaters headed to the door. This time it was two girls who looked to be around 11 years old dressed as a soccer player and a cheerleader. I called out to them and they, too, came over to the car to receive treats before heading on their way.

Quickly we unloaded the flags, turned on the porch twinkle lights, set up the jack-o-lanterns and spooky music, and got ready for the next visitors ... who showed up around 6:45. The angel and the princess, both around 12 years old, received their treats and headed out into the night.

Our last trick-or-treaters, a wizard and a pirate, were a neighbor's grandchildren who showed up a few minutes later with Grandma in tow. Six and eight years old, they were well mannered and thanked us for their candy and, wishing us a Happy Halloween as they left, went on their way.

And then the rain came ... and we had no more ghostly visitors. There were a number of neighborhood children who didn't show up this year ... perhaps, since it's Saturday night, they had harvest parties to attend. Perhaps the weather deterred them. Of course, since we live in a rural area, we do not have the large numbers of trick-or-treaters that others do.

Email ThisBlogThis!Share to TwitterShare to FacebookShare to Pinterest
Labels: Halloween