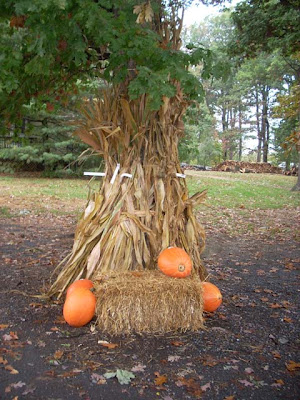 Mix pumpkins, a corn maze, farm animals, hay rides, and a farm market with kids of all ages ... and you get the Cestari Farm Pumpkin Festival in the western Augusta County village of Churchville. Located in the Central Shenandoah Valley of Virginia, it offers activities for adults and kids alike. Check out the article in Monday's Staunton News Leader telling about the fun of visiting Cestari Farm. 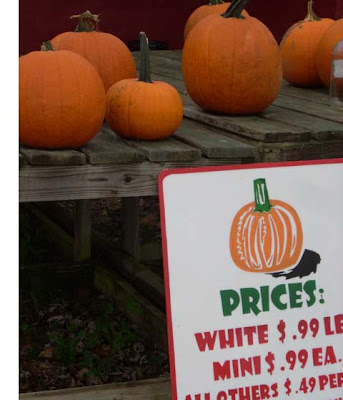 Even in the rain and chill of this past weekend, children and adults turned out to choose just the right pumpkin for Halloween night or for pumpkin pies, and to pet the animals and roam the corn maze. The Pumpkin Festival continues this weekend, October 24-25, from 9 a.m. until 5 p.m. each day. 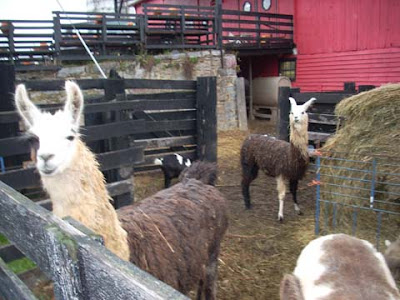 Farm animals were on display including llamas, miniature donkeys, sheep, and goats ... animals that elicited a squeal of delight from little ones when they spied the four-footed creatures. 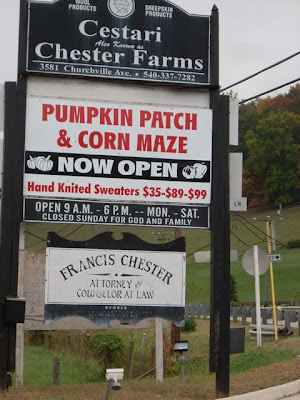 A hay ride to the pumpkin patch offered the opportunity to search for the perfect pumpkin. 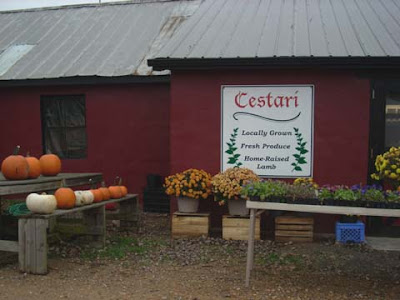 Meanwhile, other farm products were available at the barn including mums, pumpkins for those who do not have time to ride to the pumpkin patch, and other goodies. 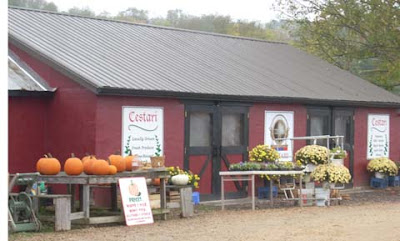 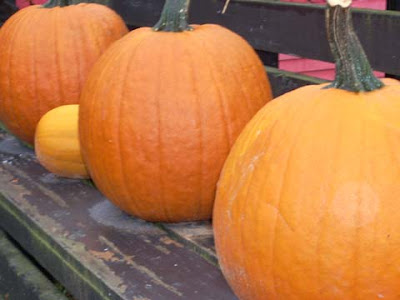 News Leader reporter Jody Lawrence visited the farm and talked with excited visitors who were happy to see there was a corn maze as well as a hay ride to the pumpkin patch:

The hay rides were only part of the fun, the route taking patrons from the main barn, around the corn maze, through the pumpkin patch and back across a small bridge to the red barn.

Lauren Hepper, with her baby, Caroline Hepper, 5 months, strapped to her chest, enjoyed the anticipation of a hayride and corn maze on a brisk Sunday afternoon. Caroline, in her little brown wool-knit skull cap, looked cozy and ready to go.

"We've been looking forward to the fall activities," Hepper said, nodding toward her eight other companions waiting for the next tractor. The Charlottesville resident said her husband and friends had been scouring the area for things to do and lighted upon Cestari Farms.

"And they had a corn maze," Hepper said with a laugh as she wiped drool from Caroline's mouth and adjusted her cap.

Owner Francis Chester said folks such as Hepper and her family are the type of visitors they've been seeing over the weekend. He said he's been surprised at the number of people who have turned out, including those from out of town.

"Weather or not, they're coming out," he said, grinning and looking out the window at the gray and cold afternoon sky.

Be sure to check out the Pumpkin Festival this weekend, Oct. 24-25 ... you may find just the right pumpkin for your Halloween night.

Email ThisBlogThis!Share to TwitterShare to FacebookShare to Pinterest
Labels: autumn in Shenandoah Valley