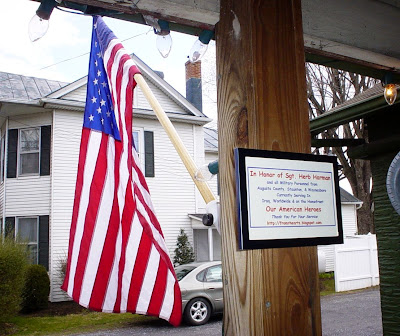 Flag in honor of SSgt. Herb Harman, Army National Reserve, from Augusta County, who rejoined the military after 9/11 at the age of 40.
September 11, 2001 ... a date that most Ameicans have not forgotten. Many, however, have forgotten the terrorism attacks on our country, the worst in our history, when 3,000 innocent victims lost their lives in the Twin Towers, the Pentagon, and a field in Pennsylvania.

On this Veterans Day we remember and are thankful to our active and reserve military who are rotating in and out of the front line in Iraq and Afghanistan to protect our freedoms and to keep us safe here at home.

We also owe a huge debt of gratitude to our veterans who have served in war and peace time over the years including my late father who was WW II Navy (USS Wisconsin) ... my WW II uncle whom I never met but who was killed in France three weeks before the end of the war ... my WW II step-dad who was Navy ... my Vietnam era Air Force veteran husband ... my U.S. Army veteran brother-in-law ... many others ...

... and Lance Cpl. Nate Salatin, United States Marine Corps, who is deploying for the second time to Iraq at the end of this month.

I hear people saying we don't need this war
I say there's some things worth fighting for
What about our freedom and this piece of ground?
We didn't get to keep 'em by backing down
They say we don't realize the mess we're getting in
Before you start preaching
Let me ask you this my friend

They took all the footage off my T.V.
Said it's too disturbing for you and me
It'll just breed anger that's what the experts say
If it was up to me I'd show it every day
Some say this country's just out looking for a fight
After 9/11 man I'd have to say that's right