A Shenandoah morning on the porch 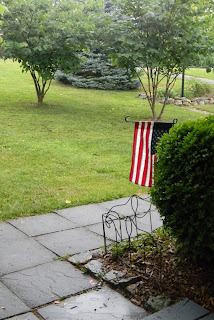 Ahhh. Morning on the porch sitting in a rocking chair listening to nature around me. This is probably my favorite time before the bustle of the day as the world shakes off its sleepiness and the quiet coolness of the morning settles on my shoulders.

It's overcast with a promise of rain during the day and so, for now, the sun's hot rays have not penetrated the clouds, and the cool breeze lulls me into sitting outside for a while longer. A loud racket in the garden area from the resident mockingbirds sends the alert that a crow is raiding their nest, and then the crow, chased by the much smaller mockingbird, swoops in front of the porch as it seeks safety in a nearby tree.

All around is a symphony of song birds that interrupt the quiet morning air. A cardinal just checked out the wisteria that drapes itself across the porch, his brilliant red plumage standing out in the thick matting of green leaves as he goes about his business of the day.

Across the way, a rabbit has been calmly grazing for some time in the clover around the flower bed ... nibbling, then eying its surroundings, then nibbling again followed by a short hop to a fresh area of the smorgasbord that I know as my front yard. Above in branches of the river birch, a small bird is loudly fussing at another for some infraction unknown to me. A movement caught my eye as a tiny brown frog hopped across the slate sidewalk toward safety in the boxwoods.

The air is fairly still with only the slightest hint of a breeze under gray skies. Looking across the field toward the Appalachian Mountains in the distance, they are obscured in fog or haze or both. It's hard to believe it's already July ... where has the year gone? Rain has come often enough that the yard is still green. In past years, it has been dried up and brown at this stage but there's still plenty of time for the six weeks of drought that often accompany Virginia summers.

Waking up to a Shenandoah Valley morning....

Email ThisBlogThis!Share to TwitterShare to FacebookShare to Pinterest
Labels: summer in Shenandoah Valley