Shenandoah Valley 4th of July weekend ... events around the area 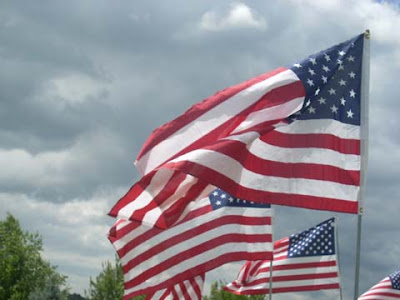 American flags against the Shenandoah Valley sky.
Independence Day ... the very name conjures up visions of fireworks and red, white, and blue ... picnics and cookouts and parades ... patriotism and American pride.

Most of us are proud to be American. We're independent, just like this country we love, and we're strong and self-reliant. We proudly display American flags as we celebrate those who fought and freed us from British control ... and we remember our active military members who are still fighting for the freedoms that allow us to gather for celebrations with family and friends.

So I was surprised to read the Harvard study that is going around proclaiming those who celebrate the 4th of July are "right-wingers." It went on to say:


"Fourth of July celebrations in the United States shape the nation's political landscape by forming beliefs and increasing participation, primarily in favor of the Republican Party," said the report from Harvard.

I've got to stand up for my Democratic and Independent friends who are also patriotic and love America. Perhaps it's the uninformed who don't celebrate such as was demonstrated in this video called, "Zombie Americans Have Forgotten Why 4th of July Is a Holiday!" Personally, I think the uninformed come from all political parties.

So back to the festivities and celebrating. There's lots going on in the Shenandoah Valley this weekend for those who live here and those who visit. Enjoy ... and don't forget the reason we celebrate the 4th of July -- America's Independence Day.

Frontier Culture Museum of Virginia:
Free admission on July 4th for this hands-on outdoor museum located in Staunton. Stop by to see interpreters on the various farms-- England, Ireland, Germany, Western Africa, and American -- and talk with them about a way of life at a different time in history.

Monticello:
For the past 49 years, Independence Day has had a special meaning at Thomas Jefferson's Monticello estate as they celebrate with their Independence Day Celebration and Naturalization Ceremony. This year 77 people from 44 countries around the world will stand on the West Lawn and become U.S. citizens at 9:00 a.m. Go to the website for more information for this free event.

First Annual Oak Leaf Bluegrass & Mountain Music Festival:
The grounds of Luray Caverns will host this first ever event along the Shenandoah Music Trail with a full weekend lineup of entertainment on July 2 through July 4. Check out the website for information on prices, camping, and musical groups who will be performing.

Wintergreen 4th of July:
Head for the higher altitudes for a Fourth of July Jubilee with wine tastings, fireworks, arts and crafts, scenic chairlift rides, and much more family fun.

Staunton's Old Fashioned 4th of July:
With a full weekend lineup of music and entertainment, Staunton's Gypsy Hill Park is the place to be for American Independence Day celebrations. See the complete lineup here ... and don't forget the annual parade Monday, July 4, at 10:00 a.m.