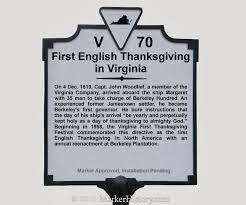 WHEREAS, the first permanent English speaking settlement in the New World was established in Virginia at Jamestown in 1607, as Captain John Smith led a group of settlers across the Atlantic on a voyage that would entail much hardship over the coming years, including disease and starvation; and

WHEREAS, to show their appreciation for the colony's success and to take stock and give thanks for their own gifts and blessings, and in spite of tremendous adversity, the settlers in Virginia found time to celebrate the first Thanksgiving in America at Berkeley Plantation on December 4, 1619; and

WHEREAS, a state historical marker commemorating “The first English Thanksgiving in Virginia” was dedicated on November 1, 2013 and was placed along Route 5 just west of the entrance to Berkeley Plantation in Charles City County; the marker states that on December 4, 1619, the ship Margaret arrived in Virginia carrying “Capt. John Woodlief, a member of the Virginia Company, with 35 men to take charge of Berkeley Hundred,” and Capt. John Woodlief “bore instructions that the day of his ship's arrival ‘be yearly and perpetually kept holy as a day of thanksgiving to almighty God’”; and

WHEREAS, while reflecting upon the actions taken by the colonists at the first Thanksgiving, we also honor the Indian peoples, for without their presence, the survival of the colonists would have been ever more difficult; and

WHEREAS, American leaders and citizens have recognized a day of Thanksgiving since our first president, George Washington issued the first Thanksgiving proclamation in 1789, stating “it is the duty of all nations to acknowledge the providence of Almighty God, to obey His will, to be grateful for His benefits, and humbly implore His protection and favor”; and

WHEREAS, it is a Virginia tradition for our citizens to come together in unity on Thanksgiving Day and give thanks for the great level of serenity, harmony and abundance with which we, as citizens of a free nation, have been blessed; the rule of law by which we peaceably govern ourselves and by which our civil and religious liberties are guaranteed; and the brave servicemen and women of our armed forces who risk their lives to defend the freedoms and blessings we cherish;

NOW, THEREFORE, I, Robert F. McDonnell, do hereby recognize November 28, 2013 as A DAY OF THANKSGIVING in our COMMONWEALTH OF VIRGINIA, and I call this observance to the attention of all our citizens; and

FURTHERMORE, I encourage all Virginians to give thanks to our Creator for our plentiful blessings, including the rights to life, liberty and the pursuit of happiness as well as the unwavering strength of our families and communities.
Posted by Lynn R. Mitchell at 11/26/2013 06:48:00 AM