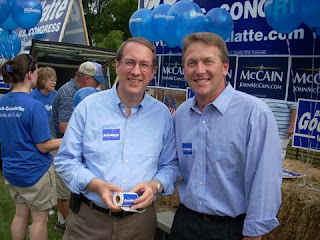 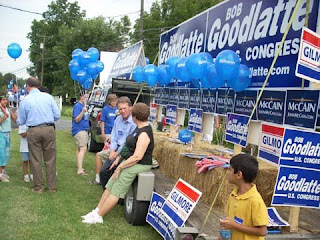 Goodlatte float representing GOP was ready and waiting to go.... 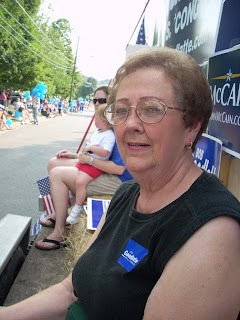 GOP Churchville Precinct Captain Emily Griffin. I call her "Miss Churchville" because she knows everyone.... 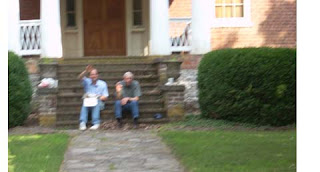 I heard someone call out my name ... and there was Will Bear sitting with his dad on the front steps of their historic home in Churchville. They run the Bear Funeral Home which has been in their family for generations. Will was formerly very involved in the Augusta County Republican Party before taking over the family business after his mother passed away. 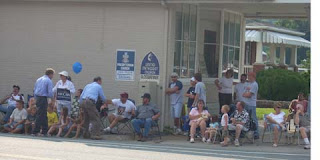 Chris Saxman and Bob Goodlatte walked the parade, criss-crossing the street to greet folks. Here they are shaking hands with a group sitting at the corner of Rt. 250 and Rt. 42 in the center of Churchville. 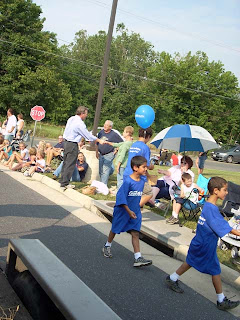 Chris Saxman with three young members of the Goodlatte team who helped pass out candy to children along the parade route. 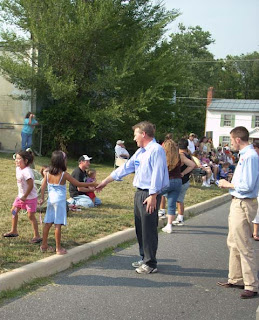 Del. Saxman shakes hands with future voters as Alex Davis passes out Goodlatte lapel stickers. Alex, a member of the Staunton GOP, was helping out in the Pastures District, an example of the cooperation between the SWAC area Republican committees.

The annual Churchville Fireman's parade is an event many families look forward to each year. I first became involved in 2001 when Chris Saxman was running for the Republican nomination for the 20th House delegate seat. We had a float that year with supporters riding while Chris worked the crowd and the rest of us walked along handing out Saxman lapel stickers. He was popular that year ... and every year since. People call out to him as he walks by ... he tries to get to as many as possible as the float slowly pulls away....

Congressman Goodlatte was also very popular in the parade as he shook hands with young and old alike. His "Goodlatte Team" was dressed in blue Goodlatte shirts and ranged in age from seven to mid-20s ... and up. Home school mom Melissa Mello of Waynesboro (another example of cooperation between the SWAC area GOP committees), her husband, and their six children were part of that team as well as YRs, staffers, and GOP activists. Emily Griffin and Al Katz, both officers on the Augusta County GOP, participated. The youngest member of the team was 18-month-old Emma who rode on the float with her mom and took it all in.

Many familiar faces were seen in the crowd including Dianne and Benny Rankin, owners of T-Bone Tooter's restaurant located in the center of Churchville. Its front porch was full of folks who had a front-row seat for the parade. Also saw Michelle and Terry Argenbright and their children as part of the motocross team of about 20 youngsters on their motor bikes riding behind the lead pickup truck. They were adorable ... and it reminded me of a mother hen with all her chicks behind her as the pickup truck drove ahead with all the little motocross guys riding behind. I wish I could have gotten a picture of them.

It was another great parade. Many thanks to all who helped make it a success especially Dave Rexrode and his family for putting together the float, decorations, and providing the pickup as the "pull" vehicle.