Round 1: Gilmore scores one on Warner at Homestead debate 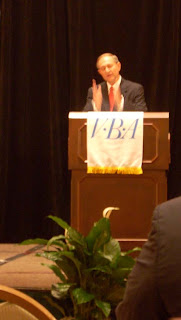 The mainstream media have turned in their reports on Saturday's debate at the Homestead between Republican Jim Gilmore and Democrat Mark Warner, and the general consensus was the debate was a draw.

Think about it. The MSM cannot bring themselves to say that Jim Gilmore scored more points and won that debate. The media's "protective bubble" around Mark Warner continues ... but Jim Gilmore is ready to pop that bubble with hard-hitting facts that, until now, have been mainly ignored by many in the press. 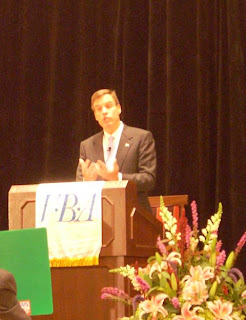 Gov. Gilmore punched hard at energy issues and the need for Virginians to be able to trust their leaders. At times he left Warner looking uncomfortable as the verbal barbs went back and forth between these two former Virginia governors ... one who has been scrutinized to the nth degree by the media ... the other who has been largely given a pass. 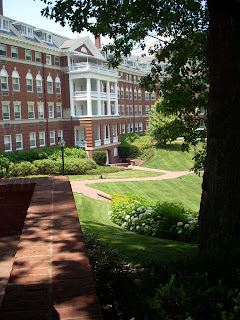 This debate was reminiscent of two years ago when the Virginia Bar Association hosted the Allen-Webb debate in the same room. Refreshments were set up outside the room so folks were able to mingle and talk while sipping a last cup of coffee or other caffeinated beverage ... and snacking on a large Homestead cookie ... call it "breakfast dessert."

The actual debate set-up was different ... stage was at opposite end of the room than it was in 2006. While Allen stood on the left and Webb on the right sides of the stage that year, this time it was the way it should be for a Republican ... Jim Gilmore was on the right side and Warner was on the left. It was a good crowd and much media coverage.

The introduction:
Shortly after 11:00 the announcer welcomed everyone for being there and then, to introduce the candidates who were waiting out-of-sight, he first called Gov. Jim Gilmore's name. Applause, applause, applause ... but no Jim Gilmore. I was looking in the direction the media had their platoon of cameras pointed because I figured they knew something I didn't but after about 15 seconds or so and no sighting of Gov. Gilmore, I looked to the left -- nothing. Then back to the right, then scanned the doors to see if he was coming in from the back of the room and maybe shaking hands along the way. The applause died down ... still no governor. I laughed and thought to myself, "I've seen this in the movies!" The announcer told the crowd there was an audio problem so everyone talked amongst themselves as they waited. Shad Plank has the explanation of the audio issue that caused the delay.

The second introduction:
When everything was ready to go, the announcer again introduced, first, Gov. Gilmore and then Gov. Warner. They both came out to applause, waved at the audience, and took their places on stage. After a few instructions from the moderator, David Broder of the Washington Post, we were ready to go.

What stood out about Governor Gilmore's message?
I heard two themes from Jim Gilmore: who do you trust to keep his word, and energy.

Do you trust the man who told you 20 times to your face that he would not raise taxes, and then pushed through the largest tax increase in Virginia history (while the state was enjoying a substantial surplus), or the guy who said he would cut the odious car tax, and followed through by doing it?

Gilmore believes in tapping into domestic energy sources in ANWR and off-shore as well as renewable resources such as wind power and solar to ease the burden on Virginia's citizens.

What stood out about Governor Warner's message?
Mark Warner is lining himself up with McCain and John Warner. He mentioned their names throughout the debate while, interestingly, no Democrat names were mentioned except while answering the question about Al Gore's demands for climate change.

Warner had gimmicky words such as calling Gilmore's visions "gimmicks." When Gilmore held him to answering questions, Warner on several occasions resorted to saying Gilmore was "name-calling" to which Gilmore finally looked at him and said, " Saying you're a 'name-caller' is a way of calling names." Zing. The first question out of the box basically asked Mark Warner what made him think, after being defeated while running against Sen. John Warner before, that the citizens of Virginia wanted him now? The first thing out of Warner's mouth was, "John Warner is a great friend."

Mark Warner is definitely hoping to ride on those John Warner coat tails.

Largest tax increase in Virginia history:
Back to the largest tax increase in Virginia history, I am shocked the MSM hasn't picked up more on this subject. As I said before, many of them have kept Warner in a protective bubble since he was governor, not asking the hard questions or following through with research. Bob Stuart at the Waynesboro News Virginian has a good article in today's paper about the debate with equal scrutiny of each candidate.

When the candidates could ask each other a question, Gilmore, in my opinion, hit the ball out of the park when he reiterated the 2004 tax issue.

Gilmore said that in 2004 Warner pushed for a $4 billion tax increase that he had told Virginians he would not ask for and, while the issue was being debated in the General Assembly, his own secretary of finance notified him that state revenues were growing at an amazing rate ... 22.5% in March and another 22.5% in April ... but Warner kept that information to himself and did not tell the people of Virginia. He allowed the largest tax increase in Virginia history to go through even while he knew we were in a surplus. Why, Gilmore asked, didn't Mark Warner tell Virginians the state was doing well financially instead of digging deeper into their pockets for more taxes?

Warner's face turned red and little white splotches popped out on his jaw. His response? The legislature had the same access to those reports and numbers that he did, and then talked out his two-minute time limit with filler. Then Jim Gilmore looked at him and smiled, looked at the audience and said, "He didn't answer why he kept the citizens in the dark. It was a $3 billion surplus" (paraphrasing). I wrote in my notes at this point, "Warner looked uncomfortable." Jim Gilmore reiterated that need for trust between Virginia's elected officials and citizens.

Energy was another subject Gilmore was able to pound on because Mark Warner is vulnerable due to that 2005 veto of an off-shore drilling bill that passed the General Assembly and landed on his desk ... only to be deep-sixed by Warner. If that bill had passed, we would not be hearing that it will be another 10 years before we see any results from drilling; instead, we could now be down to six years or five years or less ... if Mark Warner had been proactive on the energy issue. But he wasn't, and Virginians are now suffering with $4-a-gallon gasoline.

Duck-and-weave: Warner would not give a straight-forward answer to whether he agreed with drilling off-shore. His answers were so vague that it was difficult to follow his thought process, and impossible to come to a definite conclusion. Is he ... or isn't he for drilling off-shore? He won't say "yes" or "no." Remember ... his reason for the 2005 veto for off-shore drilling was reportedly to keep the Sierra Club happy.

ANWR: Gilmore then reiterated his belief in drilling in ANWR which Warner is against. Did Warner explain why? No, but he said he was in agreement with John McCain on that issue. Riding coat tails again....

Is Mark Warner vulnerable? I believe he is for a number of reasons including his broken promises about taxes in 2004, his veto of the off-shore drilling bill in 2005, and other facts that will come out in the weeks ahead.

I have heard that Mark Warner is personable. That's wonderful ... but I am not voting for personality. I am voting for leadership ... and Jim Gilmore has that proven leadership. If we have bombs exploding in this country, I want Jim Gilmore's experience as governor of Virginia during the tragedy of 9/11 and his experience on the 9/11 Commission and in Army intelligence to help keep Americans safe. If we have terrorists exploding dirty bombs and flying airplanes into buildings here at home, nothing -- nothing -- else will matter because we will be dead. 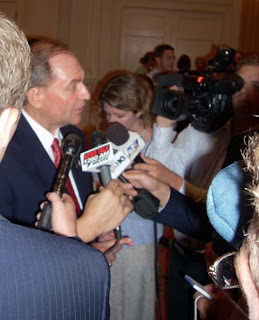 The press crushed around Jim Gilmore for 30 minutes or more after the debate. I finally got this photo after seeing only the backs of media heads for a long while. 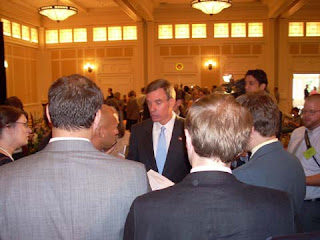 The media asked questions of Mark Warner, too, and then he left the room while Jim Gilmore was still surrounded and responding to media questions. Gilmore stayed and answered them all. 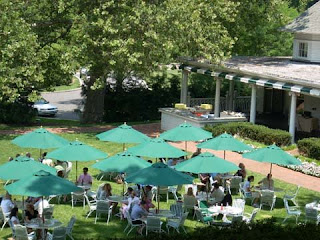 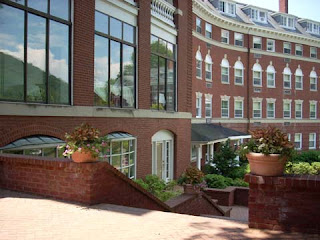 What is not to love about the Homestead. The historic beauty of the resort that was begun in 1766 ... the beauty of the surrounding mountains (seen reflected in the windows) ... the coolness of the mountain air (although one thermometer read 94 degrees on Saturday) ... the slowed-down pace of relaxing and rocking on the huge front porch.... The Republican Advance will be held there in December ... the 25th anniversary ... and we will be back.

Ditto on the great summary. Did you see what the Washington Post had to say? They did note towards the back of their article that Warner was already backtracking on whatever mediocre energy plan he tried to present during the debate!

Thanks, Ron. I will have to get to that WaPo article especially now that you have told me they are backtracking. Is it possible the MSM just may scrutinize Mark Warner's past record a little more than in the past? We can always hope....

Lynn R. Mitchell said...
This comment has been removed by the author.
12:04 AM