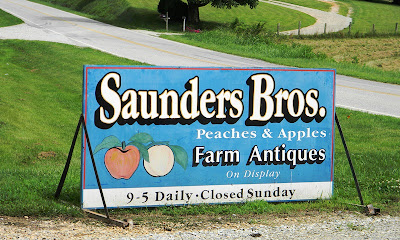 Saturday was our second stop in three days at Saunders Brothers produce market on Rt. 56 in Nelson County. The locally grown sweet corn is fantastic -- large plump ears perfect for grilling or boiling. Several varieties of locally grown peaches were in stock and, if you're not sure what variety you'd like, they have plenty for tasting. Talked with Mr. Paul Saunders who said they had cantaloupes that morning but had sold out in thirty minutes. Other local produce included green beans, yellow squash, zucchini, pickling cucumbers, and egg plant.

Perennials and annuals were marked half price with sales also on rose bushes and hydrangeas as well as hanging baskets. 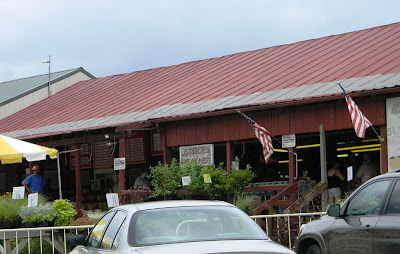 The King of Pops, a business in Richmond that sells premiere popsicles and summer time employer of SWAC Niece, purchases his peaches for the peach pops from Saunders Brothers.There's also jellies, jams, locally-made cheese, meat, ice cream, home baked goodies, and lots of other items.

Check them out on Facebook where they have regular updates as fruits and vegetables come in. On Thursday, July 18, they posted: "We've got a cornucopia of tomatoes, watermelons, corn, cucumbers, zucchini, yellow squash, eggplant, green beans, peaches, donut peaches, nectarines and summer cooking apples. There's something for everyone!"

It's a pretty drive along the mountains from Staunton to Saunders Brothers. Take Rt. 250 east from top of Afton Mountain to Rt. 6 on right. Follow Rt. 6 to intersection with Rt. 151; turn right onto Rt. 151 and follow to Rt. 56 East. Saunders Brothers is a mile or two down the road on the left.  2717 Tye Brook Hwy, Piney River, Virginia 22964 for your GPS.