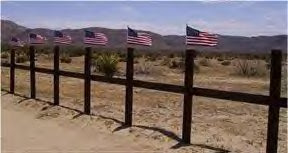 Arizona is dealing with issues most of us will never know ... almost half a million illegal aliens living in the state, police murdered by illegals, citizens murdered by illegals, number two kidnapping capital in the world, drug cartel gangs, financial drain on emergency services and schools ... and the list goes on.

Well-known Arizona rancher Rob Krentz, whose family had owned their 35,000 acre ranch on the border with Mexico since 1907, was recently murdered by illegal aliens. Even the Minutemen, a kind of citizens watch group established five years ago to protect the border, have disbanded due to increased violence.

Are there any other countries in the world that are as lax in enforcing their immigration policies as America? Many countries are not as welcoming of outsiders as the U.S.; yet when the law of the land here is enforced, the immediate response is negative.

Arizona Gov. Jan Brewer and state lawmakers decided enough was enough. With the United States government failing to protect the southern border, Arizona's only recourse was to put stronger teeth in its laws to protect its citizens. They are putting a finger in the dam and, quite frankly, doing the rest of America a favor.

In fact, polls show most Americans and the majority of those in Arizona agree with the new law, as reported in the blog Wake Up America.

An estimated 460,000 illegal immigrants reside in Arizona, which has become a main entry point for thousands of drug smugglers, human traffickers, potential terrorists, and others who often commit violent crimes against innocent people and their property. To its credit, Arizona made several previous attempts to deal with the growing problem, with limited success. In 2005, human smuggling became a state crime. In 2007, employers were prohibited from knowingly hiring illegal immigrants. But the invasion continued, and violent drug cartels have turned Phoenix into the kidnapping capital of the U.S.

Arizona has decided that if the federal government will not live up to its responsibility to control the border, it will. Governor Jan Brewer, a Republican, signed a bill that allows police officers to inquire about a person's immigration status if there is reason to suspect that individual might be an illegal immigrant.

The governor correctly noted that the new law "represents another tool for our state to use as we work to solve a crisis we did not create and the federal government has refused to fix."

Not surprisingly, Mexico's president condemned the law. Mexico has enough issues of its own dealing with drug lords, crime, and poverty ... it appears hypocritical to criticize the U.S. for trying to protect her people.

Predictably, many in the MSM are on board with the naysayers. Media Research Center has been tracking media hypocrisy in their coverage of non-existent violence by tea party ralliers while ignoring actual violence by pro-illegal alien protesters in Arizona.