Augusta: 600 turn out to protest assessments 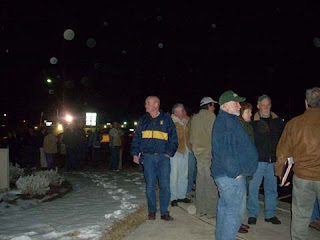 Augusta residents patiently wait in a line
that wrapped around the building.

At a community townhall meeting on Tuesday night, 600 Augusta County residents turned out to voice their objections and outrage at real estate assessements that, in some cases, increased 200% or more. Hundreds waited as temperatures hovered near 20 degrees, patiently standing in a line that wrapped around the building as folks signed petitions when they entered the building.

Because of the huge turnout, people packed the fellowship hall and the sanctuary of Verona United Methodist Church ... two meetings running concurrently ... as organizers scrambled to cover the large crowd.

Supervisor Tracy Pyles addressed residents in the fellowship hall while local attorney Francis Chester addressed them in the sanctuary ... and then the two men switched, smiling as they passed one another in the hallway, making their way to the other room to be sure and talk with all who attended.

There was laughter, there were cheers, there was applause from the crowds ... and there were questions. Folks signed petitions, picked up handout sheets with supervisor information, and thanked the organizers for providing an outlet for their frustration.

All were urged to attend the Board of Supervisors meeting at the Government Center on Wednesday, March 11, at 7:00 pm, when petitions will be delivered to supervisors.

Our thanks to all those who attended for their patience. We expected maybe 200 people at the most on a cold wintry night. We got 600. An email from a county resident said they drove by the church but saw people lined up on the sidewalk so did not stay. Who knows how many others did the same?

All the local news outlets were there. Reporter Bob Stuart with the Waynesboro News Virginian wrote:

One of the organizers of Tuesday’s meeting, Fishersville resident and former Augusta County Republican Committee Chairman Kurt Michael, told the crowd to call their supervisors and write letters to the editor about the reassessment. Michael also urged the crowd to attend the March 11 supervisors meeting where Chester will present his petitions to the board.

The News Virginian said of Pastures Supervisor Tracy Pyles, the lone Democrat on the Board of Supervisors:

Pyles looked at the jammed sanctuary at the church and said “this is average Joe Augusta County” and “the nuts and bolts of this county.”

Speaking of the increased assessments in a community that has lost hundreds of jobs in the past few months, Mr. Pyles advised residents to contact their supervisors and Commissoner of Revenue Jean Shrewsbury.

"We’ll be doing harm to people who can’t take another lick,’’ he said. Pyles urged the county residents to talk to their respective supervisors and Augusta County Commissioner of the Revenue Jean Shrewsbury.

“If we have the will we can turn this thing back,’’ said Pyles. He also urged the crowd to show up at regular supervisors meetings the second and fourth Wednesdays of the month. “If you fill up the room it will speak volumes,’’ he said.

NBC 29's Matt Talhelm was the first news person to arrive for the meeting as he and his camera man covered the event and filed a story for the 11 pm news.

Reporter Trevor Brown with the Staunton News Leader talked with a county resident who attended the meeting:

"I'm surprised so many people showed up, but I'm encouraged by seeing this crowd," said county resident David Delker as he watched the long line wait to enter the church Tuesday night. "I'm here because this is simple extortion by assessment, and borrowing a line from a movie, we are mad as hell and we're not going to take this anymore."

He reported that Supervisor Pyles urged residents to turn out to let the supervisors hear from them:

Pyles, who has repeatedly called for a roll back to 2005 reassessments, said it is crucial county residents let the rest of the supervisors know their concerns by showing up enmass to the supervisors' meeting, especially the March 11 session, where supervisors will conduct a hearing on Chester's petition.

"If a crowd like this shows up every time we have a board meeting, they are going to get sick and tired of each and every one of you standing up for two minutes and saying 'this isn't right,'" Pyles said. "If we fight this as an organized group enough, they will have to back down."

The News Leader's photographer Pat Jarrett stopped at the sign-in table to say hello to everyone ... he had taken photos of me for a story in August about my trip to the Republican National Convention ... and then spent the evening taking photos for the News Leader's photo gallery.

Other coverage was provided by WHSV TV-3 and Chris Graham with the Augusta Free Press.

Someone asked for the salaries of county public officials and I hope to have that information posted later today as well as contact information for supervisors and the Government Center.

Many thanks to Supervisor Tracy Pyles who was in Tennessee on business and drove back in time to attend last night's meeting, and thank you to Francis Chester.

Together, Augusta ... we can make a difference!

Thanks for the info. We're getting the word out to sugn these petitions this week.

Thanks for your help. Remember March 11 at the Government Center at the Board of Supervisors meeting at 7 pm. Bring all your friends!