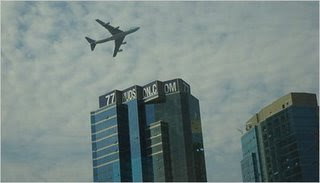 That White House photo op with NYC landmarks? It cost $328,835 ... at a time when Americans are tightening their belts more than ever.

Who is paying for this? I hope it's not my tax money.

After asking for ideas to cut federal spending this past weekend in his weekly YouTube Address, the Obama White House freaked out New York City residents by sending two fighter jets and Air Force One to buzz Ground Zero and the Statue of Liberty on Monday morning for a photo-op.

The cost of the morning photo-shoot was $328,835. It's really getting hard to take this administration seriously.

Barack Obama will quadruple the national deficit this year.

Did this White House not see tens of thousands of Americans take to the streets on Tax Day to protest wasteful spending?

You REALLY think HE gives a shit about the people of this country? Hope not, unless YOU enjoy being fooled...like so many others.