In and about Staunton and Augusta on a cloudy afternoon ... 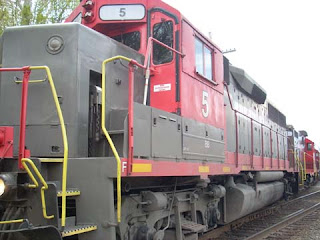 I met a friend for lunch today at the Depot Restaurant in the Wharf area of Staunton. Just as I parked behind the restaurant, a train slowly rumbled up and stopped right in front of my vehicle ... so I did what I so often do -- I picked up my camera and took a photo. It was the "Buckingham Branch" painted a nice red with yellow trim and it was so close I could have touched it. 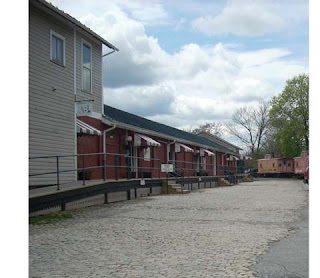 The neat thing about the Depot is that the location in the original train station. One end of the dock still serves as an Amtrak station. Even during lunch we could hear the rumbling of another train passing by. Their chicken tender garden salad is yummy especially with honey mustard dressing, and they are known especially for two desserts -- the Boxcar Brownie and their Death By Chocolate cake. 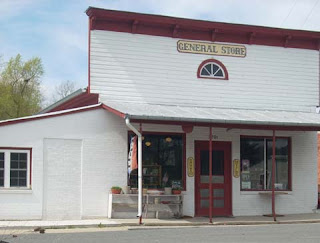 After lunch I headed to the Middlebrook General Store to visit with a friend, carrying a Boxcar Brownie from the Depot as a surprise. Sitting at a table beside the potbelly stove, we talked and enjoyed conversation with customers who stopped in to pick up a snack or lunch. The soup of the day was a hearty potato, and chili hotdogs were also available. 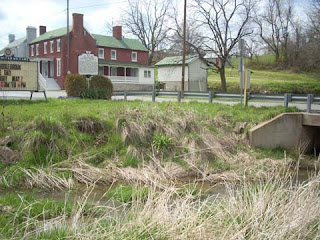 The center of Middlebrook consists of the general store, the library, an auto repair shop, the doctor's office, and the fire department. Historical homes line Middlebrook Road ... and residents are preparing for Middlebrook Day on May 2. 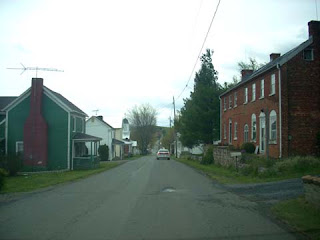 Middlebrook Road (Rt. 252) through Middlebrook, Virginia, is a two lane secondary road that narrows as it enters the village.

After leaving Middlebrook, I meandered the back roads as I found my way back home. Spring is spreading up the mountainsides ... the grass is green, streams were full with runoff from recent rains, flowers are blooming, wild flowering trees dot the hillsides. The clouds hung low with spotty showers and even some sleet early in the day as the temps topped out in the upper 40s with gusty winds.