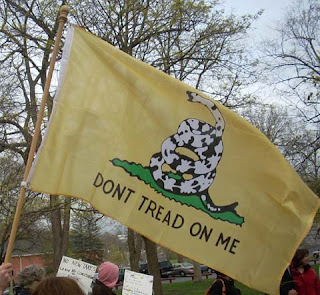 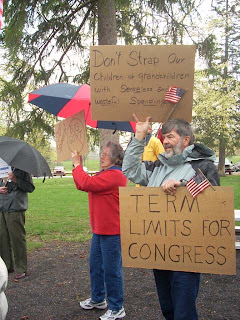 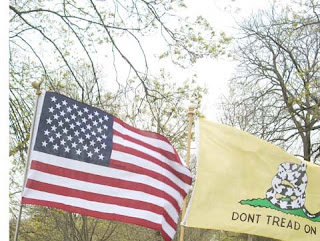 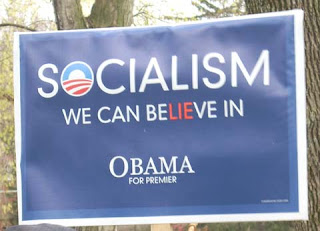 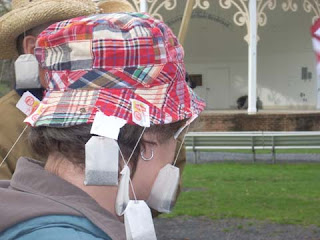 Tea bags were the fashion statement of the day. 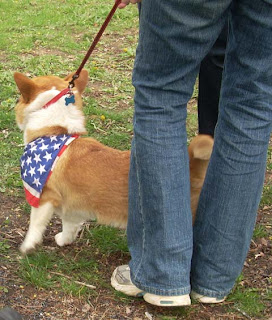 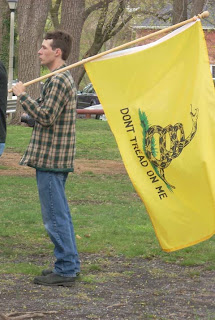 "Don't Tread On Me" flags were popular. 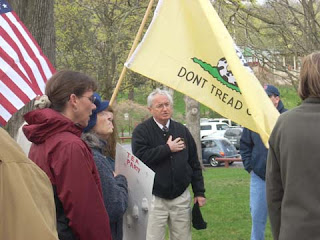 Tom Nelson, a Navy veteran, joins the crowd in singing the National Anthem.

This grandmother was there with her grandchildren. 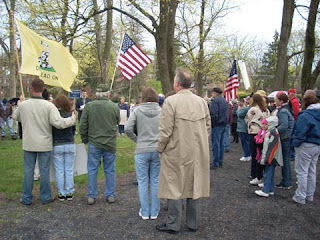 David Karaffa with "Don't Tread On Me" flag and SWAC Husband with American flag. 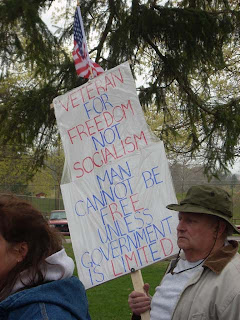 Many military veterans turned out. 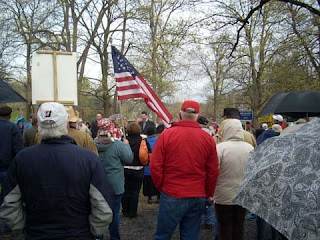 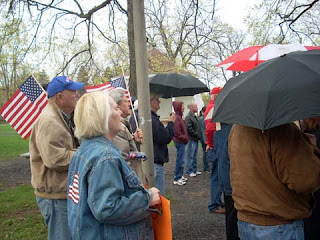 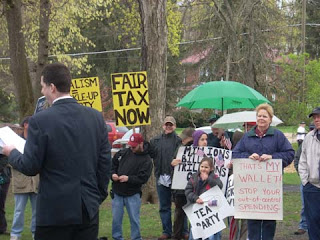 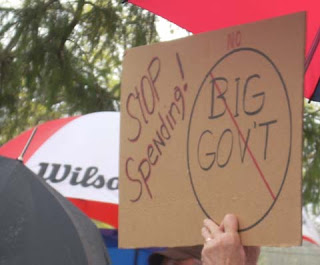 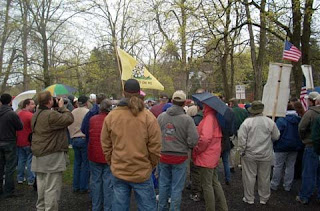 The drizzly rain and cold could not dampen the spirit and enthusiasm of 150 local residents who turned out Wednesday afternoon at Gypsy Hill Park to express their freedom of speech at Gypsy Hill Park's Tax Day Tea Party.

A special note: Mr. D.E. Hite, affectionately known as Speedy, 93 years old and an Army veteran who served through three wars (WW II, Korea, Vietnam), came out to make his voice heard. He had fought for our right to assemble and make our voices heard.

“Justice is blind and no one is above it,” said Scott Batten, a Bridgewater resident who led the event. “The government works for me. I do not answer to them. They answer to me.”

Standing in the cold and rain, protesters cheered as Batten and other residents spoke about not changing the meaning of the Constitution, the fact that God does belong in government and that tax dollars are spent frivolously.

“If they took the time to write it down, they probably meant exactly what they said,” Batten said, of the Constitution.

“And others should take the time to read it,” said David Karaffa, an Augusta County resident, who attended the event with his 14-year-old sister, Rachel Karaffa.

“So often we’ve been given the choice between progressive and progressive light,” Batten said. “We haven’t had a real conservative since probably Reagan.”

“They’re not progressive. They’re regressive,” shouted Frank Fenneran of Augusta County, as the rest of the group laughed.

“Here, give him these tea bags for me,” city resident Bill Hamilton to David Karaffa, who plans to attend the event.

“I’ll be there,” Karaffa said, while holding a “Don’t Tread on Me” flag. “I may just bring this flag.”

This is the time to speak up. We are the Silent Majority ... no more.

It's funny to see so many people in your pictures from the park that were at the one in Fishersville as well, David Karaffa was there with his flag and pretty much saved the show a bit by shutting up the Conspiracy Kooks on stage and tried to get the crowd pumped up..

We should have headed over there ourselves but we just felt like we had just wasted our time so badly, we went home very angry and drained.

Actually, we were at Gypsy Hill at 6:00 before heading over to Expoland. The event in the park finished up and most headed to the other event in Fisherville.

When oh when were you EVER silent?

You'd probably be better off being silent. But by all means please keep this up.

LOL. Zen, I used to be silent ... and then we had eight years of the Clintons.

That was when I became involved for the same reason I remain involved today ... for the future of my kids. My agenda is the principles I believe in.

I suppose I could become silent if you decided to do the same....

Nah.As to term limits, perhaps you should ask Congressman Goodlatte about that yourself.

Personally, I believe in term limits ... but they won't work unless they are put in place across the board for everyone.

Come on, Lynn. Let's just face it, you are a 20 percenter. You are one of the extremely rare, but all too common, unwavering Bush loyalists. Correct?
So, there can be no way for you to honestly claim "principles" as your reason for teabagging, especially on fiscal responsibility. No twist of logic you attempt can possibly stand up to reason.

You must not have very strong conviction of your personal principles if you can so easily set them aside because everyone else will not play along. That's the opposite of being principled.

Please keep this up, it's not only very entertaining, but assures that you remain in the political wilderness.

We had a few tea parties here in New York on Tax Day also.

If you want to see a recap of the NY events, plus the best NY State Tea Party video, check out our website here:

In the mean time, keep up the momentum!

Keep up the good work in New York, Dan. We are thankful and appreciative of the Gathering of Eagles and their service to this country, and to you as a leader to help put pressure on Washington, DC. Together ... we will make a difference.