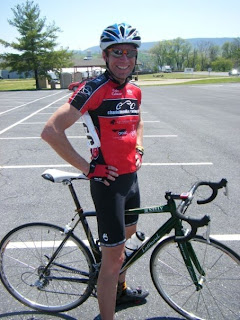 What do you get when you mix a Grand Prix bike race and a physician from UVA?

You get a first-hand account ... and that's what was provided by 48-year-old Mark Robbins of Charlottesville, a participant in Sunday's race held in downtown Waynesboro.

Mark was known to me because we corresponded about a post I wrote a while back describing the blight of Afton Mountain and how beautiful it could be and the economic benefits to the area if it was restored. He wrote to say he agreed, and that he had biked to Afton and along the Parkway.

This is one athletic guy. He started running 33 years ago, and has participated in races from 5k to marathons, then began competing in triathlon contests 22 years ago -- sprint to Ironman. He has traveled the mid-Atlantic region competing in 100+ events.

Keep in mind this is what he does for fun.

Mark Robbins' day job finds him at the University of Virginia Hospital as a pulmonary attending physician, and a teacher in the medical school.

This native of Morgantown, WV, took up running while still in his teens. But Sunday found him taking to the streets with 150 other bikers in the Grand Prix race in Waynesboro under sunny skies with temperatures hovering at 93 degrees, and he graciously offered some observations:

A criterium circuit race is not like the other competitions. It is a bike race on a closed city course -- many laps at high speed.

We raced in Waynesboro, VA. The course was up the hill on Main Street -- up another hill to Fishburn Military Academy -- a long descent -- two sharp lefts and repeat. And repeat … and repeat....

In contrast to a running race, the bike circuit pace begins like a cannonball shot from a cannon ... all-out …pedal to the floor. The leader drives the pace … everyone else hangs on and hopes to avoid crashing.

On this course the long climb fractured the field and I soon found myself in a group (not the lead group). Every lap we lost people and gained on riders dropped off the front.

After the organizers check the speed, they set the number of laps. After 12 minutes of racing it was eight laps to go (8 laps!!). I tried to push the pace but stay alive for eight laps.

I finished well behind the winner but ahead of others. And didn’t crash.

A couple other differences from foot races:

1- There are many races all afternoon, each starting about an hour apart. Riders came then left. No big post-race party.

2- Downtown Waynesboro was DEAD. The tattoo parlor was open. Why?

3- No stores, cafes, etc., open. There was no place on Main Street to buy a drink and sandwich after the race. I had to hike about 6 blocks to a Subway.

4- The fine policeman blocked all the intersections -- they did great. But NO ONE goes downtown in Waynesboro after Sunday church. Really -- looks like a town with no people. A Boy Scout Troop could have staffed the barricades. Just kidding- the police were great.

8- CRASHES ... there were crashes! The rescue squad was appreciated.

It was an intense workout … not fun … more just incredible work.

Mark added that the organizers, volunteers, and police were wonderful and a great help to race participants.

Some thoughts about this race if Waynesboro hosts it again ... and these are just thoughts, not criticisms.

Publicity may bring out more people although the 90+ degree heat may have helped keep some folks away.

A cowbell is often heard in the background while watching bike races on TV ... seems to add to the fun of it all and perhaps is a rallying sound for the bikers.

Local eateries may want to be sure they have some kind of representation at the sign-up area (ads, people handing out coupons, directions to restaurants) so bikers from out of the area have an idea where to eat afterwards.

The news reported that local businesses were concerned because the closed streets caused them to lose business. Perhaps the organizers and businesses could work together on that problem. Another thought would be sidewalk tables for restaurants along the bike route so folks can get a bite to eat while watching the race, and bikers would have somewhere close to eat afterwards.

Was there ample parking near the course for observers? Was it publicized where to park, and where to have a good view? What I saw on TV showed empty streets.

Even though bikers are racing at different times in different races, an ending ceremony by the biking association would be nice after such an intense workout and a nice way to end the day for friends or relatives who may have accompanied the bikers.

All-in-all it presented a wonderful opportunity to bring people and revenue to the Waynesboro area.
Posted by Lynn R. Mitchell at 4/27/2009 03:20:00 PM