George Allen nails it with 'Freedom to Work' Agenda 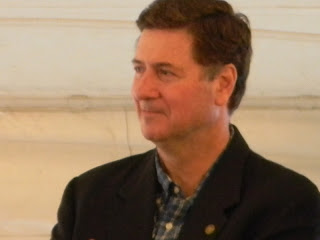 George Allen
George Allen knows how to govern. His Blueprint for America's Comeback, a pro-growth plan of action for jobs, competitiveness, freedom, and opportunity, shows that Allen has a vision of the American dream for all Virginians, and that what has been presented in Washington, DC, the past three years is not it.

Today he unveiled his "Freedom to Work" plan at Dynax American Corporation in western Virginia, a company that moved to Virginia in 1996 during Governor Allen's administration, specifically because the Commonwealth was a right-to-work state.

The Freedom to Work plan reinforces the right-to-work status of Virginia, encourages job creation and growth of business, protect the rights of hard-working citizens, and complements Allen's Blueprint for America.

The Richmond Times-Dispatch has additional details.
FREEDOM TO WORK ACT
Virginia’s and America’s opportunities and freedoms in the workplace are under assault. At a time when almost 14 million Americans are out of work and many more are underemployed, Washington is making it harder for job creators to expand and hire new workers while displaying open hostility to the Right‐to‐Work tradition and the laws in effect in 22 States.

George Allen appreciates the original and laudable goals of labor unions and supports the right of Americans to freely join a union if they wish – and their right to choose not to join or be compelled to pay dues or fees as a condition of keeping a job. He is a vigorous defender of Virginia’s Right‐to‐Work law and saw first‐hand as Governor how it helped encourage investment and expansion of businesses in Virginia.

In the United States Senate, George Allen will advance a three‐part Freedom to Work agenda to help businesses create jobs, save taxpayers money, and protect the liberty of working men and women.

Freedom of Movement: Expressly protects the right of an employer to decide whereto conduct business in the United States.


o Amends the National Labor Relations Act to provide in law that the NLRB has no power to order any employer to move, shut down, or transfer employment.
o Applies to any open complaint and ensures that no future company or workers will be intimidated or threatened as was Boeing and its employees.

Freedom of Association: Protects the right of America’s working men and women to freely choose to join a union, or to choose not to join or pay union dues or fees.


o Amends the National Labor Relations Act to prevent workers from being compelled to pay union dues or fees to get or keep a job.
o Ensures that union elections are open and fair by guaranteeing workers the opportunity to cast a secret ballot before a union can be organized.

The Freedom to Work Act complements George Allen’s Blueprint for America’s Comeback to further make sure America’s businesses have available every possible tool to create jobs.