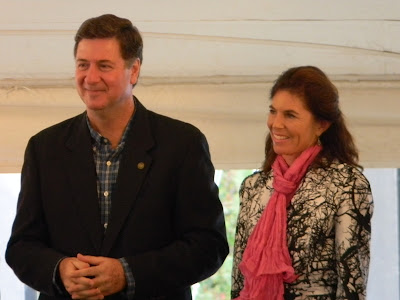 In a news conference on Tuesday, U.S. Senate candidate George Allen was endorsed by Corey Stewart, chairman of the Prince William County Board of Supervisors.

In a statement, George Allen commented on the endorsement:


“Corey Stewart is a strong, leading conservative voice in Virginia and I am honored to have his significant and important endorsement in vitally important Prince William County. It is energizing to have Corey as a leader on our positive A-Team! Under Corey’s leadership, Prince William County was recently named the best place for business in Virginia and among the top counties in the entire nation for job growth – proving that low taxes, prompt permitting and the right pro-growth policies will help create jobs, reduce unemployment and reinvigorate this stagnant economy.

“Corey has been a strong, effective leader for the people of Prince William County. We need that same common sense, pro-growth philosophy in Washington, and I plan to bring those proven ideas and solutions to the U.S. Senate to restore the conditions for more job opportunities.

“I envision a better future for Virginia and America in which we reinvigorate the entrepreneurial spirit of America with the right competitive economic, regulatory, energy and education policies for small businesses to again thrive and make Virginia and America ‘Open for Business Again!’ Government does not create jobs; the government creates the right competitive conditions for jobs and investment. Corey Stewart, these supervisors, Governor McDonnell and these General Assembly candidates are proving it in Prince William County and Virginia.

“It is wonderful to be standing here side by side with Corey – one week before this year’s election – united in support of our fellow legislators and State and local candidates. I encourage everyone to get out and vote for their Chairman, Corey Stewart, and all the Republican legislators, local supervisors, and Sheriff Glen Hill here today to help continue the job-creation policies that are making Prince William County a great place to live, learn, work and raise a family.”