Patriots for Allen ... over 100 activists endorse 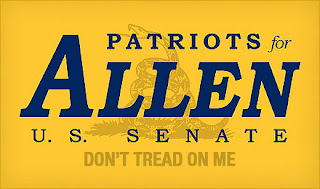 In April of 2010, before he became a candidate for the U.S. Senate, George Allen addressed a gathering of tea party folks in Staunton, Virginia. He brought down the house, something I wrote about in the Washington Examiner ("George Allen brings down the house at Staunton Tea Party"):


"Hello, patriots all!" boomed George Allen at Thursday night's tea party event in Staunton. "Nowhere is it more patriotic than in the Shenandoah Valley!"

Over 500 residents stood and cheered for the still-popular former Virginia governor and U.S. senator, a crowd that was a mix of Republicans, tea party patriots, Constitution Party, libertarians, independents, and even some Democrats who dropped by to check out the event.

Allen was a few minutes late arriving from his previous appearance at the Harrisonburg tea party about 30 minutes away. The crowd waited and cheered when he strode onto the bandstand stage wearing khaki pants and a navy blazer, looking fit and in campaign shape. Rumors had been flying that he would challenge Jim Webb for the U.S. Senate seat in 2012 and, indeed, many in the crowd mentioned "rematch" and "we'll win this time."

His enthusiasm lit up the gathering. He reminded folks of Ronald Reagan's quote about government overreaching: "If it moves, tax it. If it keeps moving, regulate it. And if it stops moving, subsidize it." The crowd laughed and nodded their heads in agreement. Allen said that Reagan had turned things around with a tax cut, which brought applause, and he added that taxes needed to be lowered so citizens could compete.

"Americans are addicted to freedom!" he added ... and the crowd cheered.

In October 2010, he was a speaker at the Virginia Tea Party convention in Richmond. George Allen was the Republican who brought conservative leadership to Virginia in the 1990s after years of Democratic control, and in January of this year I noted in the Washington Examiner that he was conservative before conservative was cool:


Will he be conservative enough for the tea party? To paraphrase Barbara Mandrell, you could say George Allen was conservative before conservative was cool. He would welcome folks at events with his familiar, "Welcome, Patriots All!" and always ended his remarks with, "Stay strong for Freedom!"

He stood for the Second Amendment, and encouraged educational standards at a time when people were concerned about graduates lacking enough knowledge to make it beyond high school. He worked to abolish parole and increase sentences for violent criminals. He also pushed for fiscal responsibility and reduced the size of government in the Commonwealth.

Today, more than 100 "Patriots for Allen" supporters announced their public endorsements of this Virginia leader. The list includes many well-known names from throughout the Commonwealth.

As he has always done, George Allen will continue to lead the fight for states rights, property rights, and restraining the federal government, something tea party patriots recognize as more continue to join the ranks of those who support George Allen for U.S. Senate.
Posted by Lynn R. Mitchell at 11/22/2011 11:03:00 AM