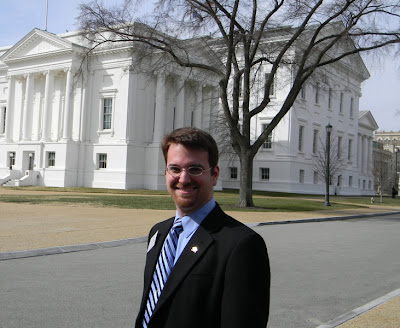 David Karaffa in front of the Virginia State Capitiol on Bloggers Day in February 2010.
It was a long journey for 28-year-old David Karaffa to his victory Tuesday night for the Beverley Manor District supervisor position in Augusta County. Fourteen months earlier he had decided to run for the job. He spent months learning the business of local government as he visited with workers in the Government Center, soaking in the new-found knowledge about water pipes and fire services and infrastructure and the budget process.

Surrounded by family and friends as they watched election returns at a Verona restaurant last night, the conservative Independent candidate was upbeat and optimistic about the day's results. When the final votes were tallied, he had won by 46 votes over incumbent Jeremy Shifflett, the board's chairman who had been endorsed by Delegates Steve Landes, Dickie Bell, and Senator Emmett Hanger whose campaign sent out a slick flyer three days before the election to encourage voters to support Shifflett.

Part of the four Independents who ran for the board, David will offer a fresh, thoughtful, youthful voice in a county that many feel needs to be updated into the 21st century. Fire and rescue concerns as well as jobs for the area are big issues that need to be addressed.

David and I have grown close since Augusta County  Republican Committee Chairman Bill Shirley illegally kicked 56 hard-working volunteers off the committee three years ago. This young man, who had been a magisterial district chairman and is the age of my son, had a million questions about how everything worked in politics ... and I answered them or sent him researching to find the answers. He was so inquisitive and willing to learn that I began calling him "Grasshopper" after the David Carradine character in the Kung Fu television show from the 1970s.

Married and the dad to two young daughters, David will hit the ground running when he takes his place in January on the Augusta County Board of Supervisors. 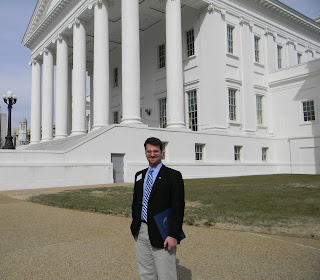 What a priviledge to know such a fine young person who knows how to focus his energy to do good.

David's campaign should also focus our attention on what the fine young people of our community can accomplish.

Tommy Kelly, David's campaign manager, bested his elders in the establishment handily. It was a real pleasure to get to know him. David's younger sister Rachel was an incredible support, as was David's Grandmother Lucille, who counts in my book as a young spirit!

David has a wonderful and unique ability to find and cultivate the gifts of those he brings around him. This type of leadership will serve him well and the people he represents will be the richer for it!

Also, Thank you so much for the bagels you brought to 'Camp Victory South,' Lynn, we REALLY appreciate it!