Wreaths Across America ... sacrifices of troops are not forgotten 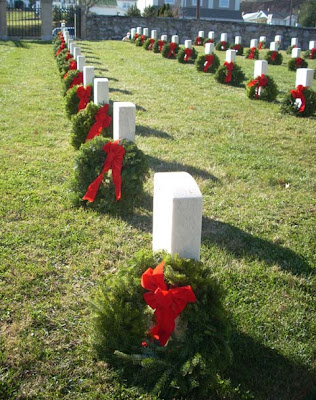 Staunton, Va, National Cemetery
Photo by Lynn R. Mitchell
If you drive by a military cemetery this weekend and see tombstones decorated with fresh, handmade balsam Christmas wreaths accented with bright red bows, you will have witnessed the generosity of Wreaths Across America.

The tradition was started with 4,000 wreaths in 1992 by Morrill Worcester and continues on the second Saturday each December. This year, thousands of volunteers across the nation and around the world will lay 219,000 wreaths on military graves as a remembrance of those who sacrificed for our freedom.

Mr. Worcester's quiet donation eighteen years ago of 4,000 wreaths for Arlington Cemetery became an annual gift of love from this Maine wreath maker who recognized that freedom is not free. Because of his generosity and desire to remember those who sacrificed, he started a tradition that was fairly obscure for 12 years until a photo hit the internet in 2005 showing the Christmas wreaths on Arlington's snow-covered graves.

Word spread quickly and wreath requests poured in for other military cemeteries around the country which led Mr. Worcester and his family to establish the non-profit Wreaths Across America with a mission to remember, honor, and teach.

What would drive this 59-year-old owner of the largest wreath producing company in the world to give away thousands of wreaths for the past 18 years? Mr. Worcester recalled that when he was a 12-year-old newspaper carrier, he won a Bangor Daily News subscription-selling contest that sent him to the Nation's Capital. The lines of white stones in Arlington Cemetery made an impression on him that never left.

Years later, Christmas 1992, the successful businessman's Worcester Wreath Company had 4,000 surplus wreaths and nothing to do with them so late in the season. Grateful that his success was due in large part to the sacrifice of American troops, and remembering the rows of white tombstones, he put in a call to Arlington Cemetery. With a handful of volunteers, they drove a truck load of wreaths to Arlington and spent the next six hours distributing them on graves, a tradition continued quietly for years by a man who did not seek publicity. The 2005 photo sealed his destiny.

Yesterday Saturday volunteers laid wreaths at American military cemeteries around the world. National Cemetery in Staunton will be included as they have in previous years. On each wreath will be a tag that reads: Through the generosity and actions of hundreds of thousands of volunteers, this wreath is donated and placed on the grave of a True American Hero. Wreaths Across America ... we make it our business to NEVER FORGET."

It's once again a reminder that freedom is not free and that Americans have not forgotten. That is the legacy of Morrill Worcester and his Maine balsam Christmas wreaths.