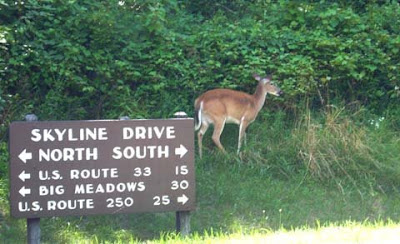 If you're going to Shenandoah National Park, you will see deer.
They are everywhere! But ... 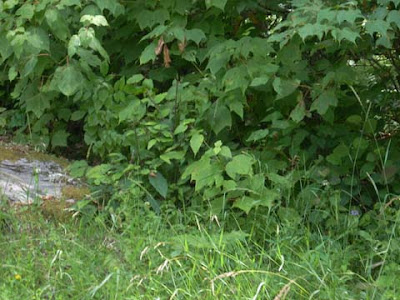 ... did you know you'll more than likely also see black bears ... like the one pictured above? What d'ya mean, you don't see a bear in the photo? It's right there ... a yearling cub ... in the greenery. 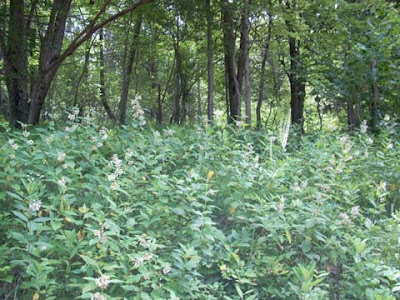 And here's a full grown black bear. What? You don't see it either? It's right there just behind the tall wild flowers ... 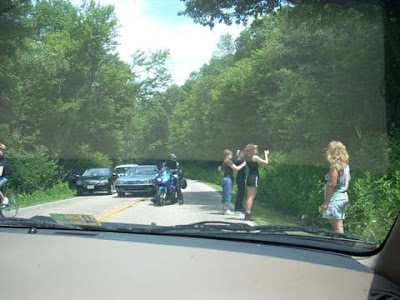 ... and these are people standing within 30' of a full-grown wild black bear as they snap photos. 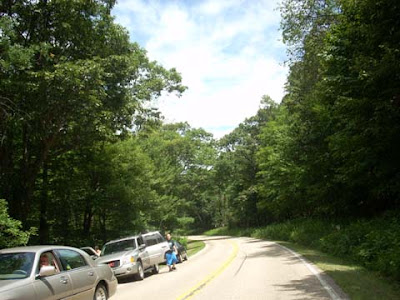 We worked our way through the traffic jam that had completely blocked Skyline Drive as people jumped out of their vehicles and rushed across the roadway to see the bear.

When I was a child, my family went camping at Smoky Mountains National Park in Tennessee where black bears were prevalent. A memory in my six-year-old mind was of cars stopped along the roadways and people standing with cameras taking photos of black bears. My sensible parents did not allow us out of the vehicle nor did they venture out. The danger was obvious.

Years later as my husband and I explored Yellowstone National Park, we were surprised at the people who exited their vehicles to take photos of the buffalo, the huge beasts that looked as if they would be slugs ... but those suckers are lightning fast.

All those memories flooded back this week while traveling along the Skyline Drive in Shenandoah National Park and seeing the same type of traffic jams whenever black bears were spotted.

As we inched our way through a throng that had clogged the Drive on the stretch between Rt. 33 and Big Meadows, I called out the window, "What are we looking at?" A nice lady standing on the shoulder of the roadway alerted me to a full-grown black bear not 30' away. It seemed harmless enough as it rooted for grubs and did whatever bears do in the middle of the day.

Another lady turned and said, "You've got to get out of the car to see it." And, indeed, it was difficult (but not impossible) to see the bear from that vantage point ... but I said, "Oh, that won't be happening."

What I really wanted to say was, "You have got to be kidding! There is no way on God's green earth I would stand 30' away from a wild black bear and snap a picture. No way! This is a national park ... not a zoo!"

I guarantee you that bear could cover 30' faster than I would be able to scramble back into the vehicle. I didn't get a photo of the bear ... all I got was foliage. As we pulled away, the crowd was still straining their necks, cameras in hand, hoping for a glimpse of a bear.

I guess those folks may not have heard that the black bear population is exploding in the western part of Virginia ...

... or about the hunter who was attacked by a black bear in a nearby county ...

... or the aggressive bear alert put out last Fall in Shenandoah National Park ...

... or that bears have been nabbing family pets ...

... or our across-the-street neighbors who were awakened in the middle of the night in 2007 when a black bear was breaking into their storage shed.

I've seen two black bears hiking this Summer. My son saw three while he was backpacking on the AT a few weeks ago.

I love to see them but you've got to have a lot of respect for these powerful animals.

Camping at Big Meadows and Loft Mountain has always caused us to be very careful throughout the years because of the bears.

Banging pans with a spoon helped keep them away. I have heard them panting past the tent at night, and we've heeded the cautious warnings to not even store toothpaste in the tent. Coolers always stored in vehicles; food prep always cleaned up.

They're amazing to see. I guess my dad drilled it enough into my head that they are wild animals and unpredictable. But it's always exciting to see them.