I am blogging the debate at The Homestead 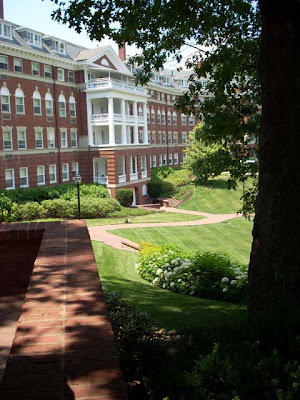 Virginia's two gubernatorial candidates will meet eye-to-eye today as they square off for Virginia's first debate between Bob McDonnell (R) and Creigh Deeds (D). Mr. Deeds will be in his backyard since he is from Bath County, home of the beautiful and historic Homestead Resort.

Sponsored by the Virginia Bar Association, this annual summer event in the mountains of western Virginia is a must-do for political junkies and offers an opportunity for Virginia's lawyers and the public to sit in as the issues are debated.

This year Virginia political bloggers will cover the event live along with mainstream media representatives. For those unable to be on the premises, a live feed will be available at VirginiaTalks.com.

This is the first meet-up between Mr. McDonnell and Mr. Deeds since the June Democratic primary. While Mr. McDonnell has proposed a series of 10 debates between now and election day, Mr. Deeds has agreed to only four.

Bloggers United had invited both candidates to attend at its annual event, debating one another in the presence of political bloggers from across the Commonwealth. Mr. McDonnell agreed; Mr. Deeds declined.

Since Mr. Deeds appears to be a reluctant debater, there may not be many opportunities to observe him discussing issues with Mr. McDonnell so this weekend is especially important.