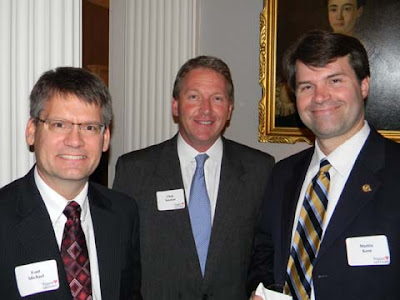 Former Delegate Chris Saxman (R-20th House) was my delegate for close to a decade, making the annual trek to Richmond and the General Assembly session to stand up for issues and work with his colleagues for the good of all Virginians. I had volunteered on his campaign in 2001 when he won the newly-created House seat for Staunton, part of Augusta, part of  Rockingham, and Highland Counties and, through the years, we worked together and remained friends.

I was the Republican activist volunteer. Chris was the elected official who represented not only the Republicans who worked to get him into office but also the Democrats, Independents, Greens, and everyone else who lived within his District. His door was open to everyone.

During the years, Chris' demeanor, candor, and friendliness were contagious and he was extremely popular as he took part in local parades and town halls and fund raisers. Along the way, I learned from this gentleman whose example taught me to cut back on the partisan rhetoric and look at the political world from a different viewpoint. One lesson impressed upon me was that those who carry something other than the Republican "R" behind their names were not automatically the enemy.

I remember a barbecue at the Saxman home one summer day years ago. When I arrived and wandered around back to the patio where Chris was grilling, I was surprised to see Steve Sisson already there. Steve, who at that time was writing as the "Blue Dog" -- Blue Dog Democrat -- became someone who could be a friend even as we disagreed on policy and we remain friends to this day. His down-home writing style and tag line, "Amen, and pass the cornbread," were read by all sides of the political spectrum.

Today, Chris has posted a column at his website that emphasizes his governing style that proved very successful in politics and, now, in business. "Making friends across the aisle" is vintage Chris Saxman as he writes:


One of the things in politics that always made me just shake my head (while hearing in my head the Robot from the TV show Lost In Space – “This. Does. Not. Compute”) was when people within my political party would ask me what was I doing hanging out with Democrats.

What many people didn't know was that Chris' dad was Republican and his mom was Democrat, and so he noted:


In my family, if you didn’t agree to sit and eat with people from the other party, you went hungry during the holidays.

Witty, humorous, charismatic, personable, knowledgeable ... Chris' column shares words of wisdom and experience that hit home in today's extremely partisan political atmosphere. My gratitude to him for his part in my political journey, growth, and -- yes -- friendship. Thanks, Chris.

Chris Saxman represented the 20th District in the Virginia House of Delegates from 2002-09. A businessman, active member of the community, and a contributor to the Bearing Drift blog, he lives in Staunton, Virginia, with his wife Michele and four children. Catch more of his columns at ChrisSaxman.com.