WxRisk and his correct snow prediction for Shenandoah Valley 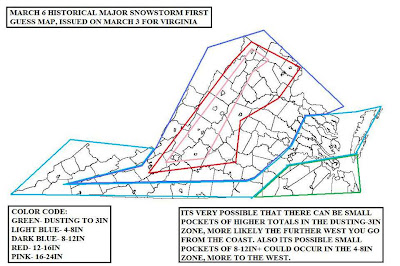 Remember this map? It was an early three-day-out prediction by DT over at WxRisk.com as he studied data about the current snowstorm and, yes, he had our part of the Shenandoah Valley in the 16-24 inch depths. He went out on a limb to suggest this mega storm could put down historic amounts of snow.

As of 8:00 a.m. Wednesday we have 14" of snow in Augusta County west of Staunton with heavy snow still falling and expected to continue all day. At the rate of an inch or more an hour, we will easily hit this prediction.

This is not the first time DT has been the lone voice suggesting deep snow and, often, he has been correct. Based out of Chester south of Richmond, a friend suggested I check him out a couple of years ago, noting that he had been correct many times when some had understandably been cautious about predictions. DT reminds me of Babe Ruth who swung at the ball with all his might. If it connected, it often went out of the park. If he missed, he missed big. That's DT -- he's not afraid to swing big.

When posting this map on March 3, I commented at the time, "WxRisk.com has been right about heavier-than-predicted snowstorms in the past which makes me pay attention to this prediction." Because of his forecast, we took it seriously and had plenty of time to prepare for deep snow and possible power outages.