Driving back to Augusta on I-81 with SWAC Husband and Suzanne, it's still fresh in my mind as I pull from my memory those who spoke and those who attended. 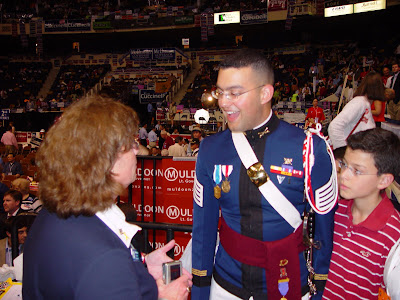 
The guest speaker was Adnan Barqawi, that wonderful young man who was a Virginia Tech cadet and captivated the 2009 Virginia Republican State Convention when he addressed the coliseum full of enthusiastic Republicans. Tonight he did not disappoint. Though it had been 16 months since the convention, and he had traded his cadet uniform for a business suit, his ability to inspire, captivate, and move those in the room had not changed. He electrified those who had not heard him in the past, and brought tears to the eyes of those who had watched his journey since moving to America. More about Adnan as I upload photos in the next few days.

All those in Republican leadership were recognized including Suzanne Curran as "volunteer extraordinaire." There was food, fellowship, music, door prizes, and fun all around.