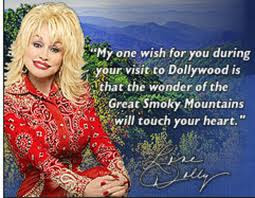 In the years when we Virginia natives lived at the Brushy Mountain foothills of northwest North Carolina, we constantly explored as much as we could in that part of the world. A short three-hour drive from our home was Dollywood in the Smokey Mountains of eastern Tennessee, a trip we were to make many times over the years.

As someone who grew up in Richmond with Kings Dominion an hour drive north on I-95, Dollywood was a more down-home amusement park, small and tucked into the mountainside on the edge of Pigeon Forge. We would stay at a favored family-owned cottage in nearby Gatlinburg and drive the short distance to Dollywood where we had season tickets.

When Dollywood opened 25 years ago, we were there to enjoy the festivities. Formerly known as Silver Dollar City, it had been bought by Dolly who was a native of the area, and she updated and changed the name, and added lots of entertainment including many members of her talented musical family. And it was fun because Dolly wanted it to be fun ... everyone was happy, everyone welcomed you, and your spirits lifted just seeing so many smiling faces.

SWAC Son was one year old and in a stroller for the grand opening. We met Dolly as she walked the park greeting folks, and got photos of her ... photos that are tucked away somewhere ... the down-to-earth hostess welcoming children of all ages to forget their cares and play for a while.

Dollywood is special all seasons of the year ... spring when there was still frost on the ground as we stood in line waiting for the gates to open ... summer when it was so hot in those humid Smokey Mountains that you just stood still and sweat popped out on your forehead ... fall with harvest decorations of pumpkins and corn stalks and a nip in the air ... and my favorite of all -- Christmas.

Christmas at Dollywood is magical, full of tiny white lights, wreaths, decorations, and the steam engine train that goes up the mountain playing, "I'll Be Home With Bells On," my favorite Dolly Christmas song. The train is outlined in white lights ... the cold winter air hits you in the face as your bury deeper into your winter coat and wrap your scarf tighter around your neck, and enjoy the merriment. Hot chocolate was a welcomed warm-up.

Dollywood. I haven't been there since returning home to Virginia 14 years ago so maybe it's time to head south to the hills of Tennessee and get drenched in down-home hospitality from Dolly's crew.