America: Requiring English in workplace is not discrimination ... it is common sense 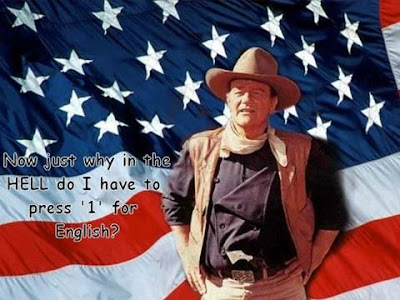 “In America, requiring English in the workplace is not discrimination; it's common sense.”
Sen. Lamar Alexander (R-TN)

November 15th, 2007 - WASHINGTON, D.C. - U.S. Senator Lamar Alexander (R-TN) today said on the Senate floor that he wants to “make clear that it is not against federal law for an employer to require employees to speak English on the job.”

“Our greatest accomplishment as a country has been uniting our magnificent diversity, and one way we have done that is by all speaking a common language, English,” Alexander said. “A federal agency says it is illegal for an employer to require employees to speak in English, which, in plain English, means that thousands of small businesses in America would have to hire a lawyer and be prepared to make their case to a federal agency that there is some special reason to justify speaking English on the job. I believe this is a gross distortion of the Civil Rights Act and a complete misunderstanding of what it means to be an American.”

That Alexander amendment was added to the Commerce, Justice and Science (CJS) Appropriations bill for Fiscal Year 2008 on June 28th during committee deliberations on the annual spending measure by a vote of 15 to 14. The full Senate on October 16th supported the provision when the CJS Appropriations bill passed the Senate by a vote of 75 to 19. The Senate version of the bill included the Alexander provision with no amendment offered to change it.

On November 8th, the House voted to instruct its conferees to agree to Alexander’s amendment during negotiations to reconcile the House and Senate versions of the CJS Appropriations bill, which includes annual funding for the FBI, Drug Enforcement Administration (DEA), and U.S. Commission on Civil Rights.

“Becoming American cannot be based upon race or where your grandparents were born or your native language or religion,” Alexander said. “It is based upon swearing allegiance to our country, learning American history and learning our common language, English, so we can speak to one another, live together more easily and do business with one another. One way to create unity is to value, not devalue, our common language, English.”

Alexander’s amendment was prompted by a lawsuit filed in April by the EEOC against the Salvation Army for allegedly discriminating against two of the Army's employees in a Framingham, Mass., thrift store for requiring them to speak English on the job. The Salvation Army in Massachusetts clearly posted the rule, and the employees were given a year to learn. The EEOC is a federal agency funded by Congress with a current backlog of approximately 56,000 cases.

Citing a recent media report, Alexander said English lawsuits are on the rise. The number of charges filed with the EEOC alleging discrimination based on such English-only policies is six times larger that it was 10 years ago, Alexander said, growing from 32 charges in 1996 to about 200 in 2006.

At a Senate hearing on the matter in May, Alexander told EEOC Chair Naomi Earp, “I find this to be an astonishing waste of your time and taxpayer money to … by your lawsuit – require every single employer in America to worry that they will face litigation if they require English to be spoken in the workplace.”

Alexander, a former U.S. Secretary of Education, is a longtime advocate of policies to encourage immigrant assimilation and to help prospective citizens learn English.

Email ThisBlogThis!Share to TwitterShare to FacebookShare to Pinterest
Labels: English as official language of America, English in workplace, Lamar Alexander