Nate ... at home this Christmas 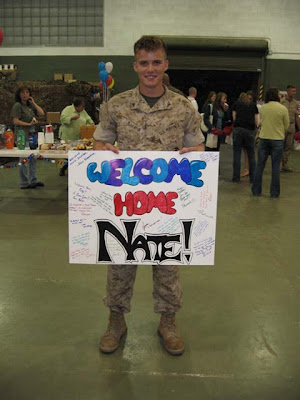 Lance Cpl. Nate Salatin, USMC
Augusta County, Virginia
May 2007 - Home from Iraq
Nate is in the States for the holidays this year, returning in May after serving in Iraq where he spent last Christmas. He will be one of a large group of friends who will gather at my home this weekend to celebrate friendship and the Christmas season ... a reminder of the troops who will be away from their families and friends this holiday as they serve in a faraway land.

Nate's family included the following correspondence in their Christmas card ... something worth sharing....

We praise the Lord for the safe return from Iraq of Nate and his fellow Marines. The enclosed family photo was taken about 5 a.m., not long after the bus pulled in at the Lynchburg Reserve Center on April 29. It didn't matter at all that we had been up almost the entire night. A good crowd of friends were on hand to welcome him as well. Nate's summer went by quickly as he and his brother Josh worked long hours in the hot sun constructing log homes, and played volleyball and soccer with friends in the summer evenings. It was a great way to readjust to American life. Thank you again to the many, many people who prayed diligently for Nate while he was in harm's way.

Nate is back at Virginia Military Institute in Lexington, Virginia, for his second year of college. He is happy to be back with the same roommates he had his first year. He is studying hard, as well as attending drill one weekend a month with the other Lynchburg Marine Corps Reservists. On November 16 all the VMI cadets in Nate's class received their college rings in a special ceremony which is a tradition at VMI. Just before Thanksgiving all the approvals came together for Nate to join VMI's study abroad program. Nate will leave in mid-January for Lithuania, for a semester's study at the University of Vilinus, earning college credit toward a VMI diploma. This former Soviet Bloc country should be quite different from his last stint outside the USA. A chance to visit some neighboring countries should be possible as well.

Now That, is 'Just Outstanding'! I look forward to talking to that Devil Dog!