Could this happen in America? 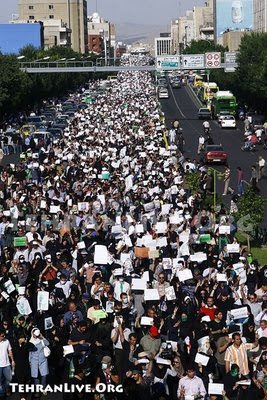 Protestors on streets of Iran

In America, Democrats led by President Barack Obama are jamming tax increases, stimulus bills, bailouts, out-of-control spending, and an upcoming universal health care program down the throats of hard-working Americans. As Obama pushes his socialism agenda and as tea party tax protests continue to grow, one has to wonder while watching the protestors in Iran if that could happen in America.

We are a nation simmering with discontent. It crosses all political and socioeconomic lines as demonstrated by this letter from a former Democrat who just wants to see someone in leadership ... lead.

With many tea parties planned for the 4th of July weekend ... and with the national tea party tax protest planned for Washington, DC, on September 12, one has to wonder if we could have hundreds, thousands, millions take to the streets of America....
Posted by Lynn R. Mitchell at 6/19/2009 01:50:00 PM

i blame the republicans for our current situation. if the republicans would adopt a platform of honest fiscal conservatism rather than focusing on divisive wedge issues, they would remain in power.

i hope they can run a candidate in 2012 that will de-emphasize what people dislike about the republicans, and emphasize small government and spending restraint.

After seeing how close Bush came to wholly suspending our Constitution, I am not sure if anyone should ever again put the Republicans in charge of our national, or state government.

The Republican leadership has lost the trust of the American people and no amount of ranting by talk-show hosts, or bloggers calling Obama a Socialist, is going to win back the hearts of our citizens for the GOP.

The best thing for our nation would be for this current Republican cabal to fade away and have a new political party based on Constitutional government and expanding our liberty to rise-up and challenge the Democrats.