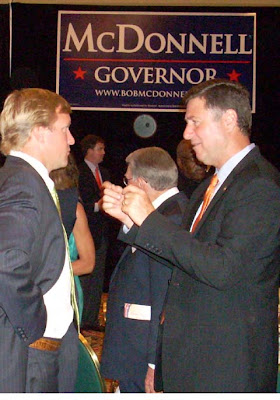 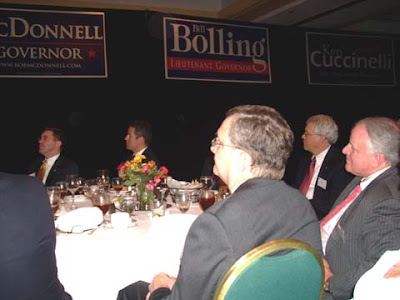 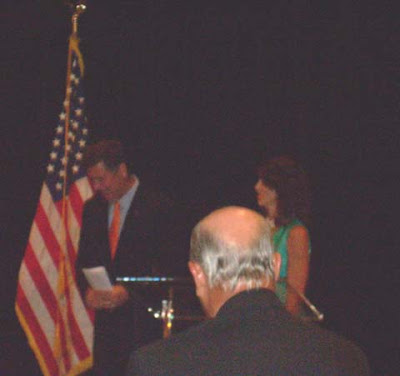 Sen. Allen leaves the podium to a standing ovation as wife, Susan, comes on stage to introduce the next speaker. 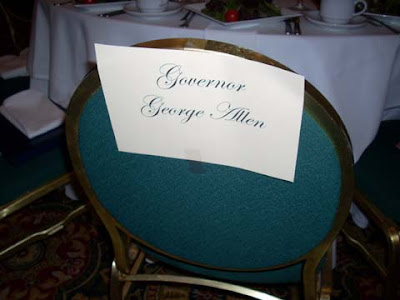 He strode to the podium to a standing ovation after being introduced by his wife, Susan.

The familiar booming voice of former Delegate, Governor, and U.S. Senator George Allen brought a cheer from the crowd of Republicans at Friday night's RPV Victory Dinner. He thanked everyone who had helped with the event and he thanked the sponsors, all with that George Allen charm so familiar to many in the room.

He thanked "the M&M Boys" of RPV Chairman Pat Mullins and RPV Communications Director Tim Murtaugh for the great job they are doing in this important election year. His remarks were animated as he talked about D.C. legislators being as "clueless as a hog looking at a Timex watch," and noted that good ideas often come from people not in government at all.

He said the American people want energy freedom, which brought cheers from the room. He said state leadership will be provided by Bob McDonnell when he is elected Governor, and that all America is watching Virginia this fall. We want to be able to say on November 3, 2009, that "Virginians have decided ... Virginia has chosen to stand strong for freedom with Bob McDonnell, Fireball Bill Bolling, and Ken Cuccinelli."

He received a standing ovation as he made his way back to his table.