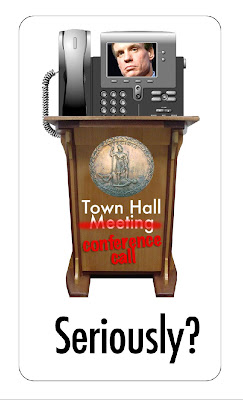 The Richmond Tea Party folks have called out Sen. Mark Warner after hos teleconference Monday afternoon with those who signed up at his website. The 5:30 pm event left many feeling left out and unable to talk with their representative about the proposed nationalized health care.
While ducking out on meeting with his constituents, is Mark Warner in trouble with some of his backers?

Richmond Tea Party has sponsored a billboard campaign in Richmond calling out Jim Webb and Mark Warner to bring REAL health care townhall meetings to the area. The billboards can be found at these locations:

The billboard campaign targets both Senators Webb and Warner with messages such as: "Wanted: Senators Willing to Hold Real Town Halls. Apply Next Election," and "Senator Webb: Absent on Health Care. Where's Our Town Hall?"
Posted by Lynn R. Mitchell at 8/25/2009 01:05:00 PM